Old Tom Morris was born in St. Andrews in 1821 as Tom Mitchell Morris Sr. In his mid-teens, he began a four-year apprenticeship followed by a further five years of employment as a journeyman under the watchful eye of Allan Robertson of St. Andrews. Old Tom Morris was fired on the spot in 1848 for the blasphemous use of the gutty ball as opposed to the feathery ball which Allan Robertson sold.

In 1851, Old Tom moved to Prestwick to serve as a professional and keeper of the green. Upon arriving, work was undertaken to layout, construct, and maintain the course itself. Besides, he also founded what is now known as the Open Championship, winning it four times in the 1860s.

Due to the success achieved at Prestwick, Old Tom Morris engaged in designing courses for the hefty sum of £1! As a result, it is thought Old Tom created or modified more than 100 courses, many of which are still considered some of the best in the game.

In 1864, Old Tom returned to St. Andrews and made significant changes to the Old Course, making it the course we know and love today. Old Tom officially retired in 1903, but the R&A offered him a consultancy position with a salary for the remainder of his life.

His legacy continues to be felt. Those influenced by him and who apprenticed under his tutelage included Bob Simpson, Archie Simpson, CB MacDonald, Donald Ross, AW Tillinghast and Donald Ross. These men furthered the discipline of golf course architecture and inspired the current generation of practising architects.

See a modern take on this old classic. 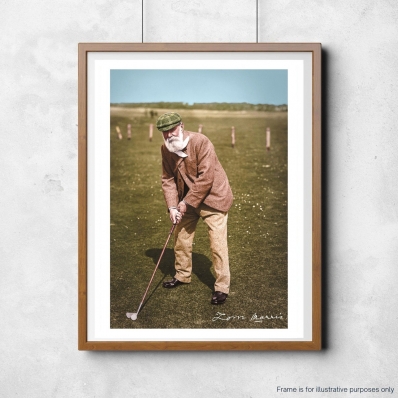 Limited by circumstance and the naturalness and rugged nature of the best sites available means Old Tom Morris' minimalist work is still amongst the best in the game.

Old Tom Morris felt no necessity to have trees.

Natural green sites are located in hollows or on plateaus placed diagonally to the fairway.

Par 3’s often surrounded by pot bunkers however, grassy hollows are used around greens as hazards.

Burns, streams, and ditches are common and are used near and around greens, but ponds are scarcely used.