It's an original Old Tom masterpiece and perhaps the most natural links in the world. 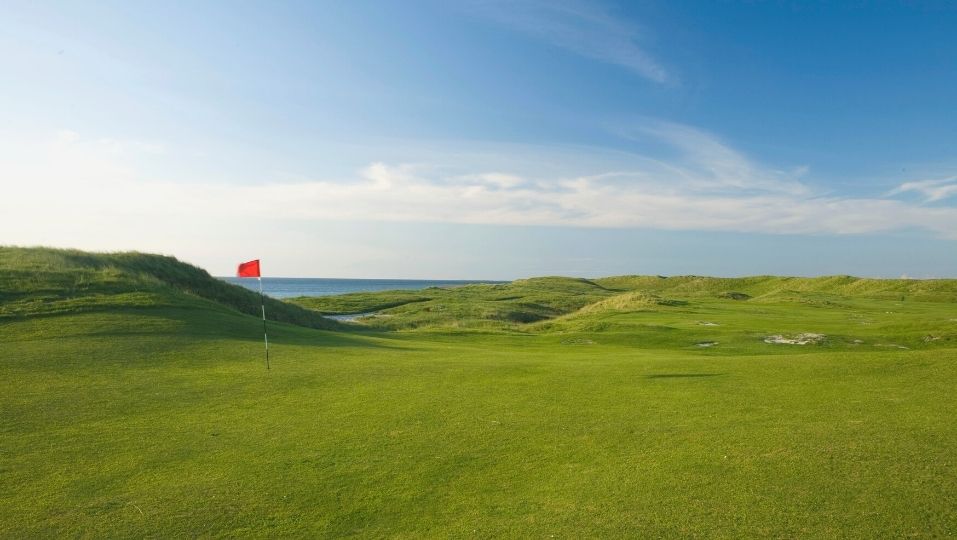 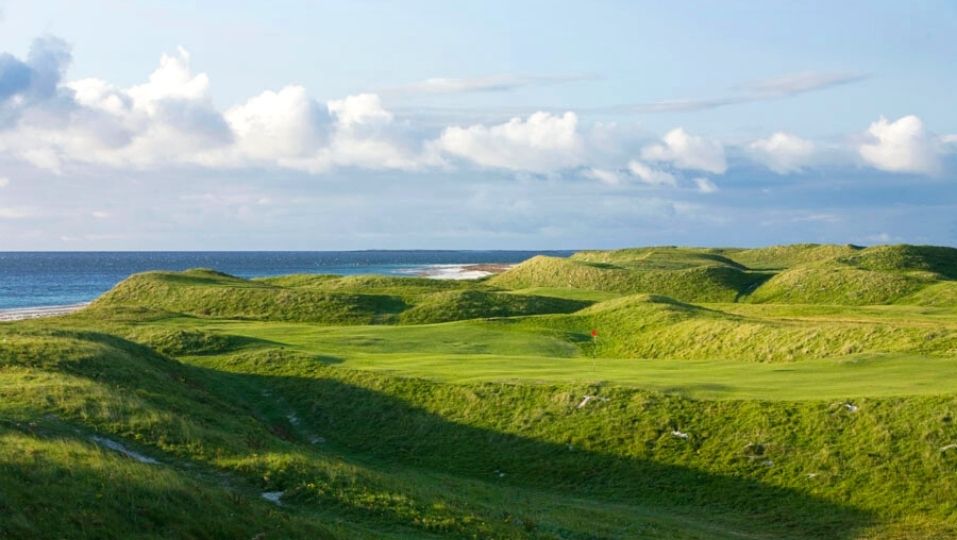 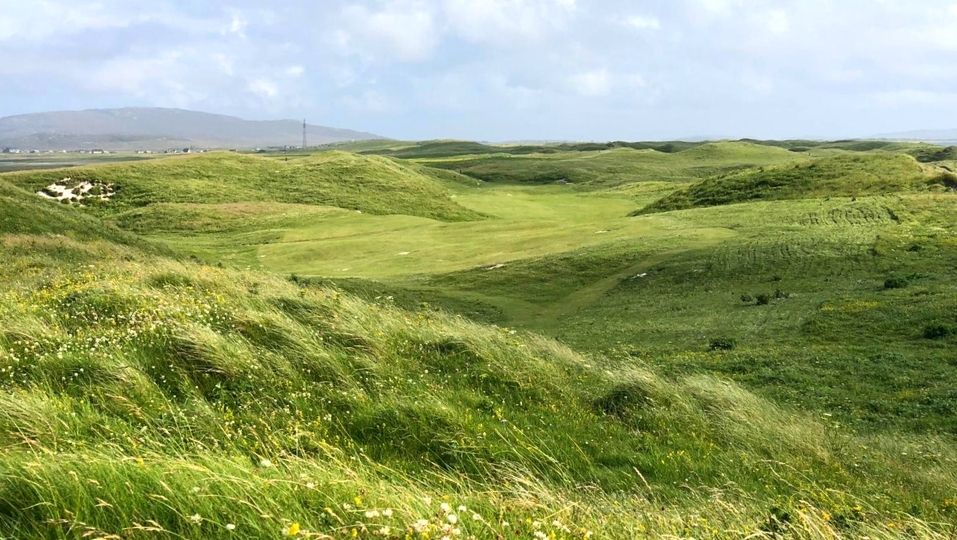 You can hire Hickories at Askernish Golf Club!

Maintenance is chemical-free with sheep and cattle playing their part in the winter months. During daisy season, the club doesn't spray... they sell yellow golf balls in the clubhouse.

Holes 7-12 are as good a stretch of holes at any other links in Ireland or the rest of Scotland. Tom Doak puts these on par with anything you'd find at Ballybunion or Dornoch.

Aaskernish Golf Club is located in the dunes adjacent to a 20 miles stretch of white shell beach on Uist's west coast. The course gives spectacular views of Barra and the Atlantic Ocean. The golf course is playable year-round, although during the winter you will share the golf course with the local crofter's grazing animals. (Crofters are local residents who are able to use small parcels of land to cultivate produce or graze animals. Most land in Scotland shared by golf courses is used by crofters to graze animals, hence the wire fences around many of the greens.) In total, there have been five iterations of Askernish Golf Club. From Old Tom Morris to Tom Doak, we detail the course's evolution below.

In June 1891, Old Tom Morris and Horace Hutchinson traveled to South Uist, Outer Hebrides, and laid out Askernish Golf Club for a wealthy landowner in 1891. The original course was abandoned and transferred into a crofting tenure land in 1922.

The bulk of the original layout would now be where holes 6 through 17 lie. This is the dunes land where things get the most interesting and a natural site for Old Tom to choose...

In 1936, regular air service from Renfrew to Askernish was established and a 12-hole course was laid out on the machair. The 12-hole course was in play until 1938 when the regular flights ceased with the course slipping into disrepair.

A third golf course was established in 1956 and lasted until 1982 after the prime motivator, Dr. Robertson, left the island.

In 2002, Colin MacGregor began cutting the grass and soon had 9 holes to play on. Gordon Irvine heard of the course and arrived in December of 2005 to inspect the site and establish the credibility of the Old Tom Morris design.

Returning in March of 2006, Gordon Irvine, Martin Ebert, Chris Haspel, and Adam Lawerence returned to find the original Askernish Golf Club design. On a single day, the architects looked for the original green sites and then routed the course. In total, it is reckoned four of the original greens were found and have been included in the new routing. How did they find the supposed locations? The holes in the dunes land are so undulating, that any flattened areas were prime candidates for green site locations. The rediscovered course was laid out in the typical Old Tom Morris fashion of 18 stakes on a Sunday afternoon.

The modern Askernish Golf Club course opened for play on August 22, 2008. Since then, Tom Doak and Mike Keiser have made further tweaks, fine-tuning the design. In more recent years, Gordon Irvine has been at the helm, making design decisions including the current change to the 12th, 13th, and 14th holes.

The most recent evolution to Askernish Golf Club took place in 2022, with holes 12, 13, and 14 have been revamped. The famous 12th with a dual fairway is being reconstituted. From the 12th tee, the right or high side of the 12th fairway has been widened closer to the boundary line and will remain the fairway for the 12th. From the 12th tee, the low or left side of the fairway will be played in reverse to a new green site. The current 13th will be no more and a new tee for the 14th makes use of the old 14th green. Please see the diagram below that gives a rough guide as to the changes. 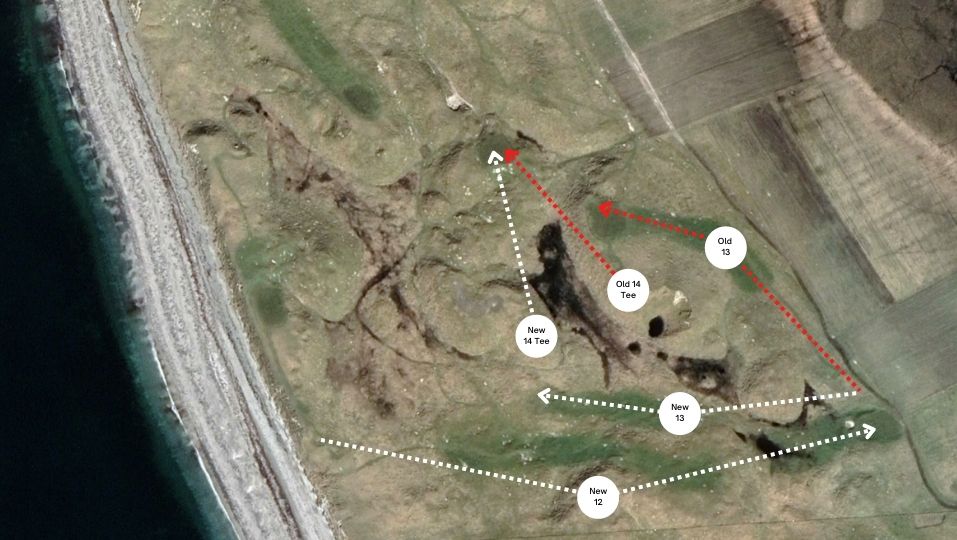 Tom Doak famously wrote that you could learn everything you need to know about golf in Scotland alone. Case and point, natural formations such as bunkers and islands in bunkers. 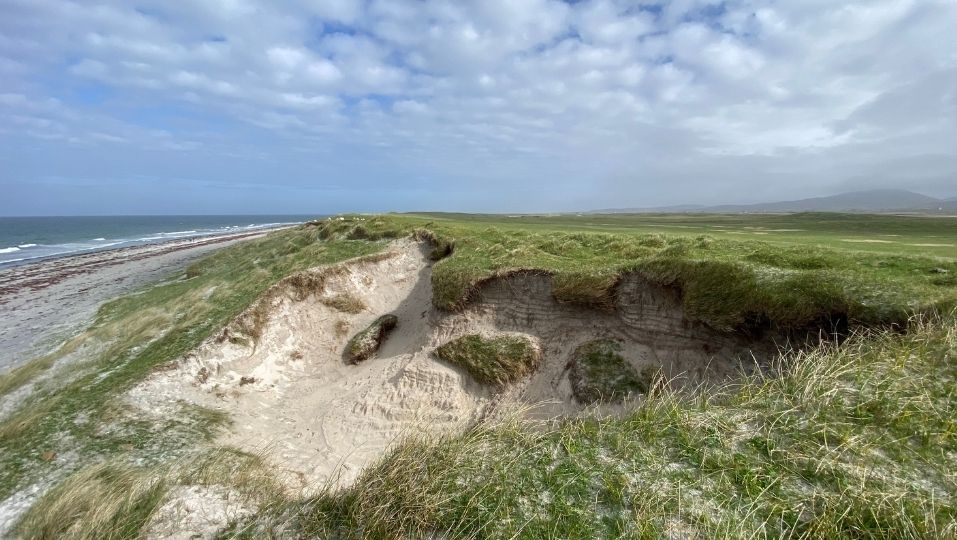 Additionally, you can clearly see how original bunkers were sited in small hillocks. Grazing animals escaping from the wind will seek refuge in these areas creating sand scrapes and turf-less depressions. Cattle, sheep, and rabbits all seem to be embracing the role of golf course architect here... placing hazards through the winter at Askernish Golf Club. There are very few man-made hazards - however, mother nature and the roaming animals do their best to support the cause. Often after the animals leave during the summer months, the course is put back to its original state. 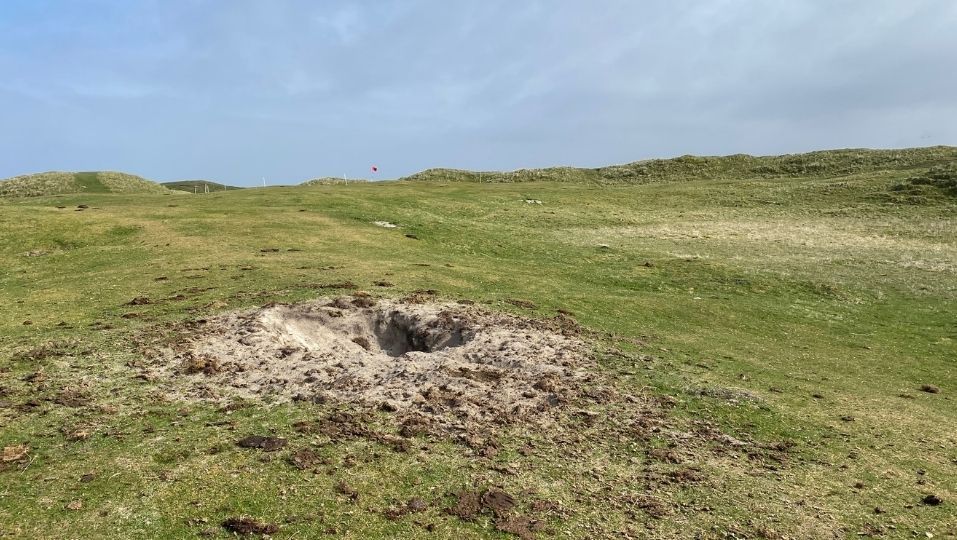 The first six holes and the home hole are found on less dramatic machair. Whilst the topography is more mundane, the quality of golf is not nor is the quality of the turf. Simple, sound, strategic golf is found cleverly using the more subtle topography on hand. It contrasts nicely with the more adventurous golf on offer later on in the round.

Perhaps surprisingly, the amount of pocket wetlands or dune slacks at Askernish Golf Club is pronounced. Straying too far from the fairway you will find them, the quantity of which was a bit of a surprise for me.

The course doesn't seem long... from the tips, the course measures just 6259 yards. This includes three par 5's that measure 509, 575, and 582 yards. What makes it play much tougher than the card suggests is the predominant wind.

Blind shots exist but are usually because of your previous shot rather than by design. For example, the second shot on 12 and the approach on 16. Choose the right side on the 12th and the approach is blind. Play away from the inside corner of 16 and the top of the pin flag may be visible.

The greens are incredible and unique. I cannot remember seeing greens like them. Some architects will create tiers or sides of the green where the cup can be placed. At Askernish Golf Club, there are pockets where a small level area of pinnable ground is located. For most lag putts, finding this small area is essential for a two-putt. The greens are possible due to the relatively few rounds of golf played and their length allows magnificent undulations and slopes. 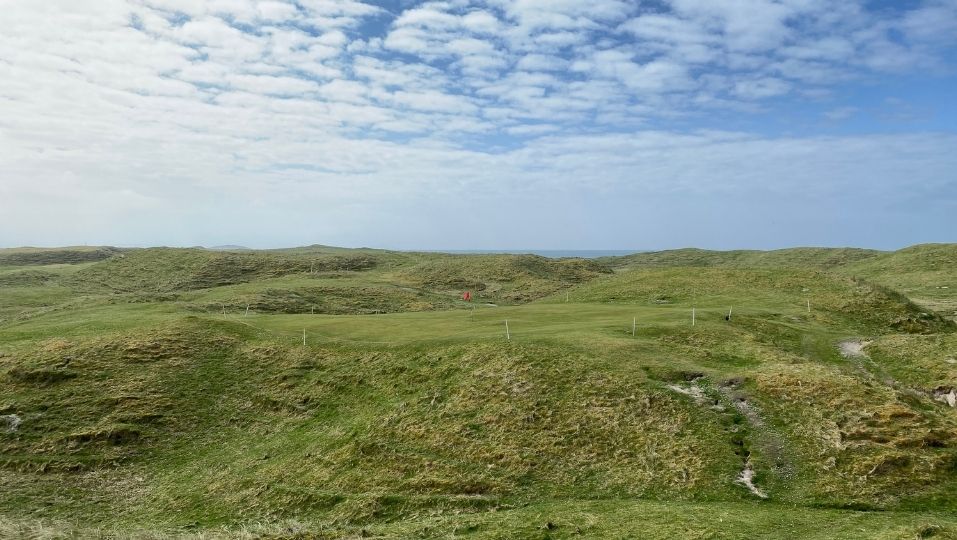 Green sites are often found on natural ridges at Askernish Golf Club. Many are slender and if approached from the wrong angle provide very little access from the ground or not much depth if an aerial approach is used. 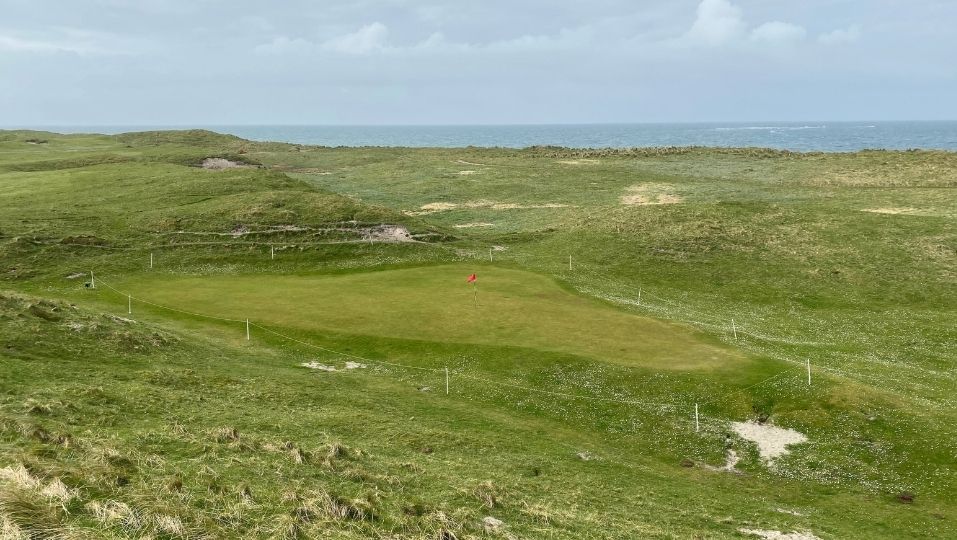 Ran Morrisett writes that Askernish's 'raw simplicity is unparalleled and appeals to true devotees of the ancient game... it is natural, rare, off the beaten track and deeply appreciated by those with a sophisticated palette. It is not for the faint of heart nor for people who insist on pristine playing conditions.' He continues, 'for those who profess an interest in minimalism as a way of architecture, no education is complete without a visit here.'