Trump's version is held unanimously as the best yet. A true bucket list experience. 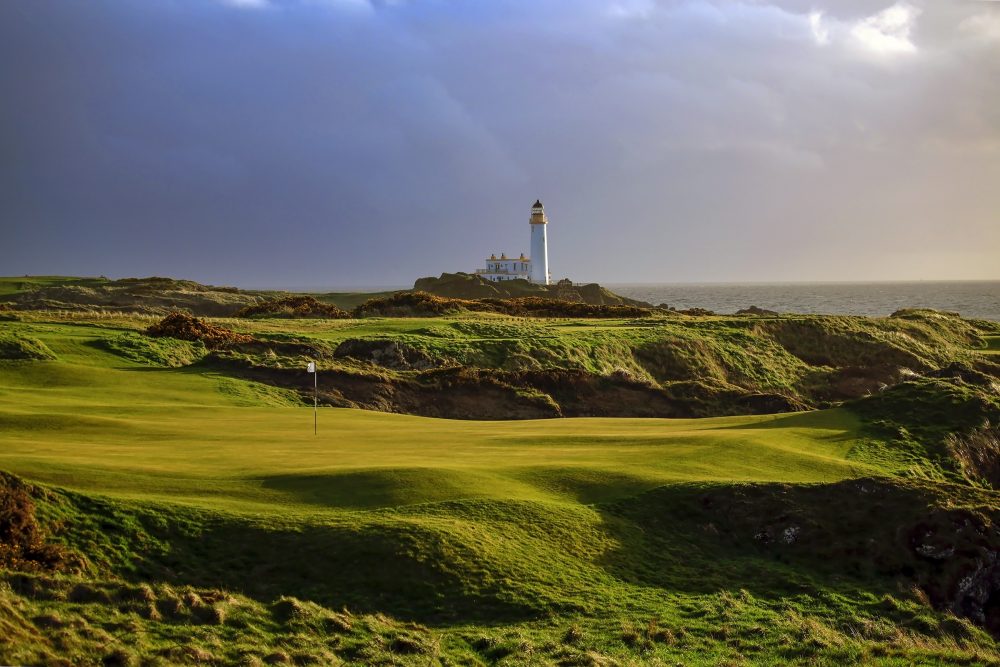 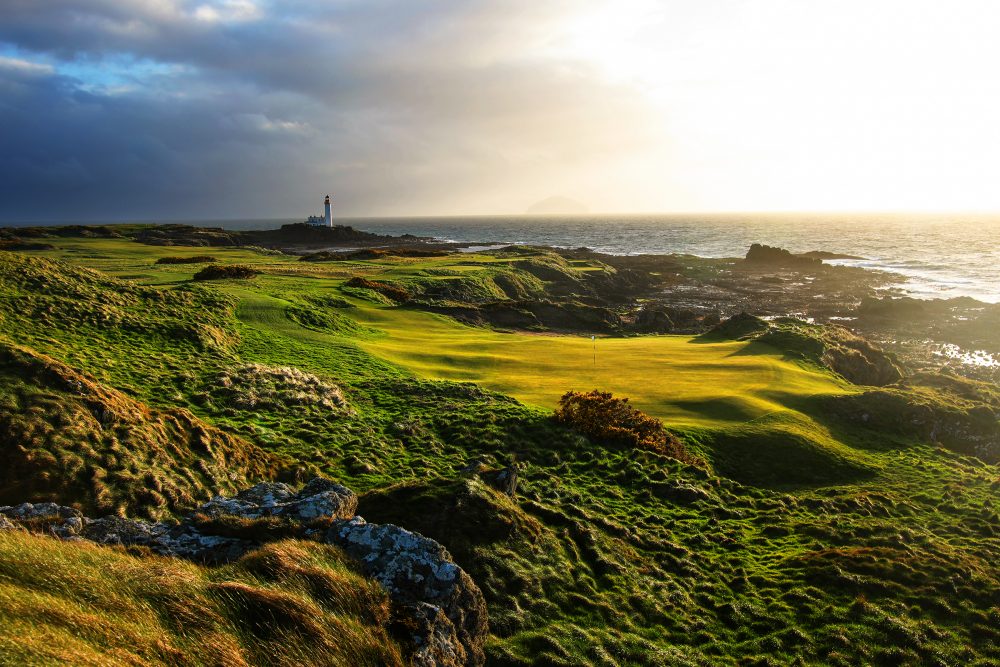 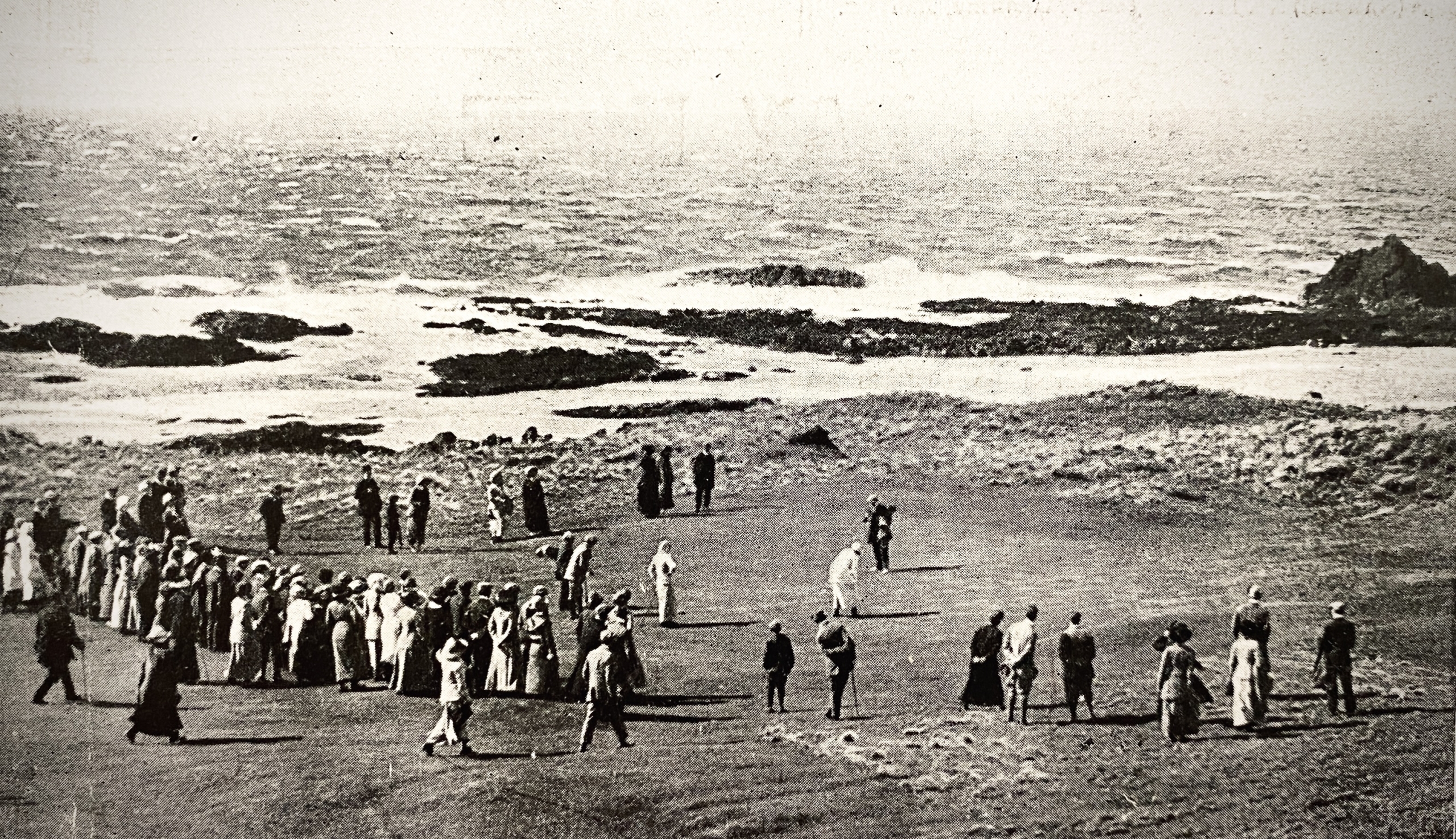 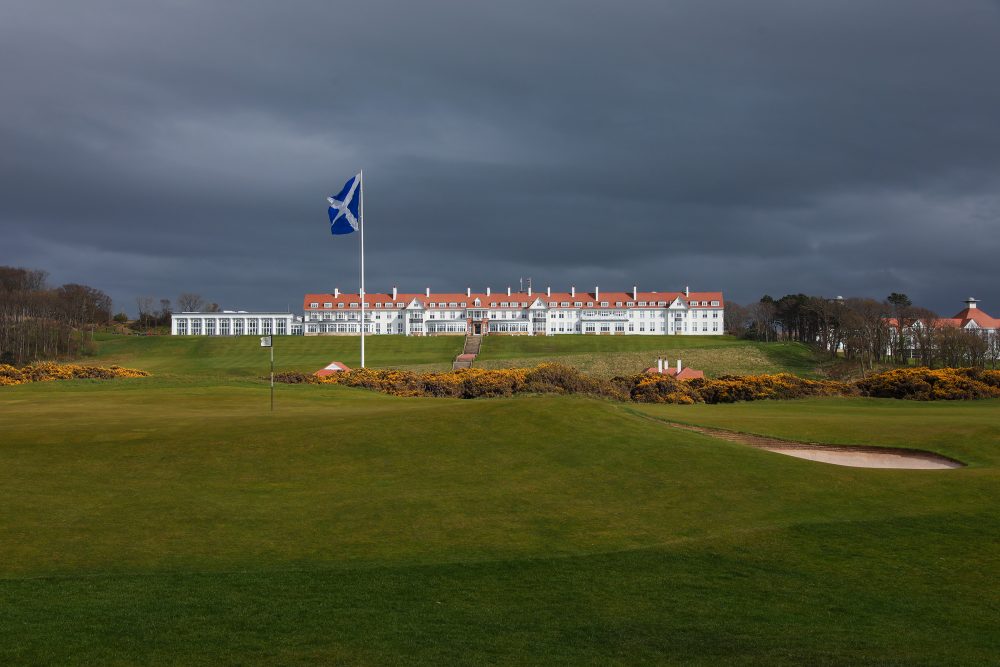 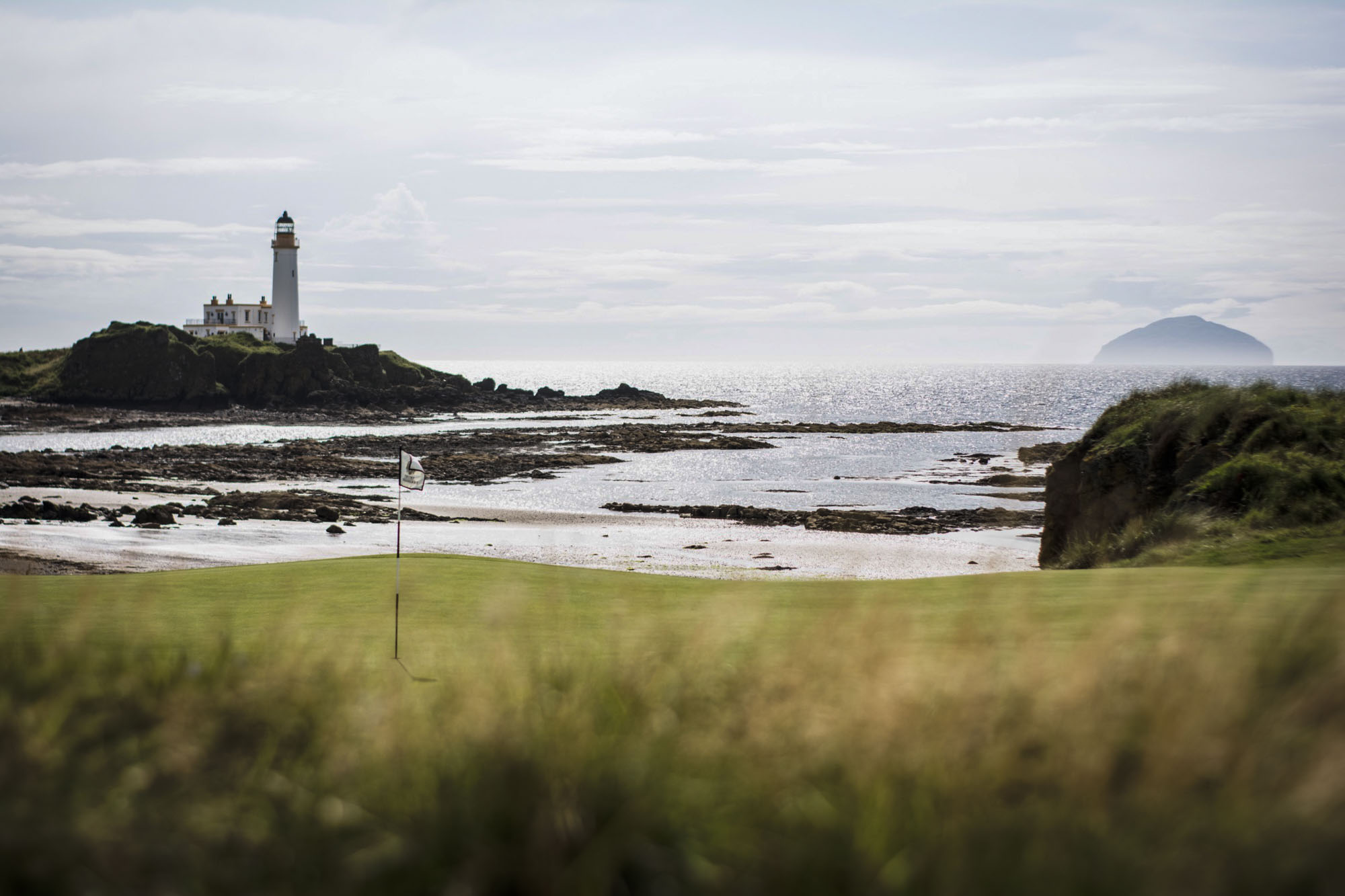 Turnberry was the world's first purpose-built golf resort! Similar to the New, Jubilee, and even the Eden at St Andrews, Trump Turnberry King Robert The Bruce will never attain the recognition it should. Due to a recent overhaul, the second course at Turnberry no longer plays second fiddle. However, such is the fate of lying beside one of the greatest links in all of golf, The Ailsa!

The Ailsa is most famous for the 1977 'Duel in the Sun' between Jack Nicklaus and Tom Watson.

On the site of the famous lighthouse are found the ruins of Turnberry Castle. Here, Robert the Bruce was born in 1274. He led Scotland to become an independent country at the Battle of Bannockburn in 1314.

Trump Turnberry's origins date to 1896 when, landowner and South-Western Railway board member, Lord Ailsa dreamt up building a railway from Ayr to Maidens, Turnberry, and Girvan. Tickets would be sold to willing golfers keen to play over a newly laid out links. A train line built in the early 20th century needed to attract holidaymakers willing to spend their cash.

The idea of exciting golf and luxury seemed irresistible. On May 17, 1906, The Station Hotel opened with previously unseen amenities such as electric lighting and hot and cold running water.

The hotel changed hands throughout the 20th century. In the early 2000s, a new proprietor made it the resort it is today. The hotel was completely refurbished in 2008 in preparation for The Open Championship in 2009.

In 2014, The Trump Organization bought the resort, renamed it Trump Turnberry, and invested heavily in both golf courses. The 1906 restaurant, deluxe ocean view rooms, and Turnberry Adventures make the destination a complete experience for those golfing or not.

Trump Turnberry Ailsa is found on the Ayrshire coast of Scotland between Maidenhead Bay and Turnberry Bay. Turnberry Bay Beach flanks The Ailsa which is punctuated by Turnberry Castle, Turnberry Lighthouse, and Ailsa Craig.

Trump Turnberry, a luxury collection resort, hosted the 1977 Open Championship and is a leading resort, golf academy, and perfect destination for golfers and non-golfers alike.

Willie Fernie was called upon to layout the original course which opened for play on July 6, 1901.

By 1906, further adjustments were made and 9 hole ladies course was laid out under the direction of A.N Weir. Just three years later, the Ladies Course was displaced by four new holes of an updated No. 1 course. A.N Weir was the Turnberry professional from 1906 to 1910 after being at Cruden Bay.

During the First World War, the dunes were leveled for airstrips, hangers, and huts. Those injured on the front were put up in the hotel which became a military hospital. In 1919, the remnants of the No.1 Course reopened for play.

In 1938, Major Cecil Hutchison redesigned the Ailsa which lasted only 4 years... it is significant as the bones of his layout provide the foundation for the course we know today.

In 1942, Trump Turnberry Ailsa was again turned over to the Ministry of War and the resort again became a military hospital. The Royal Air Force established a flying school causing more extensive damage than what was sustained during The Great War.

At the conclusion of WW2 in 1949, Philip MacKenzie Ross and Suttons were called upon to return the links to their former glory which reopened for play in 1951. Minor refinements were made by Jimmy Alexander to Trump Turnberry Ailsa in 1954.

Following the acquisition by The Trump Organization, MacKenzie & Ebert were again called in to rethink the design. The adopted design didn't affect the general routing but significant changes were made. For example, additional waterfront acreage was acquired which allowed the Par 3 9th, Par 5 10th, and Par 3 11th holes to be routed on the seafront.

A completely new 18th hole playing straight as opposed to the previous dogleg with internal OOB forced the short 6th hole to be rethought. Additionally, the changes to the 9th and 18th meant a new 14th Par 5 and the 17th a Par 4. The additional length was added on Holes 1-5, 7, 8, 12, 15, and 16. All 18 greens were completely rebuilt along with a complete bunker renovation which incorporated Philip MacKenzie Ross' post-WW2 aesthetic.


All greens and bunkers were rebuilt. 5 new holes were built, namely: 6, 9, 11, 14, and 18. In a stroke of genius, there was also the reinstatement of the classic MacKenzie Ross' doughnut bunker on 10!

There are genuinely 5 holes that can be attributed to Martin Ebert. While every hole has received new tees and bunkers, 8 can be said to be MacKenzie Ross' based on Hutchison's pre-WW2 layout. The remaining five can be called hybrids.

Trump Turnberry King Robert The Bruce is found on the Ayrshire coast of Scotland between Maidenhead Bay and Turnberry Bay. Routed back from the immediate coastline and over the former airstrips, the course has been completely reworked by Martin Ebert.

The Trump Turnberry King Robert The Bruce bunkers received the same treatment as the Aisla next door. Sandy wastelands and a wetland were introduced. Four new holes were added and the eclectic mix of holes now make up the back nine. On this inward nine, there are now three Par 3's, three Par 4's and three Par 5's!

The holes of outstanding architectural merit on Trump Turnberry King Robert The Bruce are 8, 9, 10, and 11.

The first No.2 course was laid out in 1908 by Alexander Neish Weir. It would be James Braid who would put the course on the map with his 1923 layout. Changes were made in 1926 and the course was christened the Arran.

Suffering the same fate as the Ailsa during WW2, Jimmy Alexander would lay out the course again in 1954. In 1998, the course was extended and renamed the Kintyre. 3 years later in 2001, Donald Steel and his young apprentice, Martin Ebert, redesigned the course.

After The Trump Organization purchased the resort in 2014, Martin Ebert was again called in and the new Arran was opened for play in June 2017 as Trump Turnberry King Robert The Bruce. 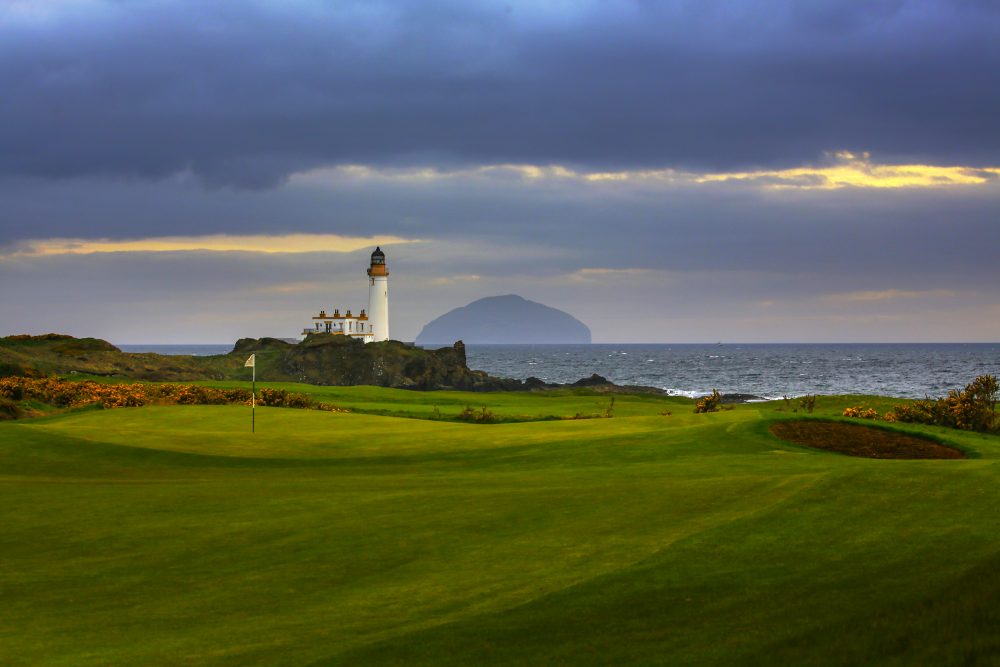 The Open Championship has been played four times at Trump Turnberry Ailsa.

The R&A recently all but suggested it would not return to Turnberry in the foreseeable future. If it was Mr. Trump's dream to host an Open Championship, it seems Trump Turnberry Ailsa would have been his best bet. Unfortunately for him, the possibility of his Ayrshire or Aberdeenshire courses ever hosting an Open appears to be, at this stage, bleak. However, the golf is so good, never say never!

The name of Trump Turnberry Ailsa is taken from the famous monolith of volcanic rock in the Firth of Clyde offshore from Girvan, South Ayrshire. Of interest, the Craig lies halfway between Glasgow and Belfast and is known as "Paddy's Mile Stone." The Craig also has its own lighthouse - construction was completed in 1886 and is still in use today. In times past, the lighthouse burnt oil as illumination before switching to incandescent lighting. In 2001, it was converted to solar power.

The iconic lighthouse is not found on Aisla Craig but rather on the mainland - and has been since 1873. The lighthouse is the oldest manmade structure on Turnberry Point and lies atop the former castle of Robert the Bruce. It is thought he was born in the site in 1274.

The lighthouse is now one of golf's most outstanding halfway houses. Incredible views of the Irish Sea and the Isle of Arran are provided to those who stay in the two-bedroom suite - a Dormy house of sorts with all the hallmarks of the Trump brand!

The Spa at Turnberry