Template Holes have become increasingly popular and an awareness of them are on many golfer's radars. Much of the interest is due to a resurgence in the appreciation of CB Macdonald's & Seth Raynor's golf course designs, especially at National Golf Links of America (NGLA).

Interestingly, the American template holes often get more attention than the originals. Below, we look at the originals found in England and Scotland.

CB Macdonald admits the hole is not a replica but rather the NGLA template hole embodies the underlying design principle. The design principle, or identifiable characteristic, is a golfer is rewarded for successfully carrying an immense bunker after which the ball can run to the green. At Sandwich, the carry is not over a bunker but a waste area.

The Alps is an Old Tom Morris original design (possibly altered imperceptibly by James Braid) and is the oldest single golf hole in Open Championship Golf. Identifiable characteristics include a blind approach over hidden bunkers to a punchbowl green. The approach must be carried rather than ran in.

The most popular of all templates, but what exactly is it? "Take a narrow tableland, tilt it a little from right to left, dig a deep bunker on the front side, approach it diagonally, and you have the Redan." - CB Macdonald. The green falls away sharply from the player with a terrifying bunker guarding a direct line. Interestingly, a redan is not solely a golfing term. It can also refer to an arrow or V-shaped fortification with banks forming part of the protection. The approach must be made from the back or opening of the V. The original falls away from right to left, with the V pointing left. A reverse Redan would mirror these same elements but in reverse.

It's all in the name. A short hole with disastrous consequences for failing to reach the putting surface. The original 5th is now the 4th and is the iconic showstopper at Brancaster. Sleepers line the elevated putting surface where the cup is obscured from view. Many of the famous green sites stateside feature a square or horseshoe shape along with a 'thumbprint' contour on the putting surface.

Harold Hilton wrote: "No hole in existence has been the innocent cause of so many opprobrious epithets and language of so lurid a hue as the Road Hole." Why the sentiments? The identifiable characteristics include a dogleg and hazard which needs to be carried at the apex. The original now features a hotel and replica drying sheds. Modern templates have used trees, bunkers or waste areas in lieu of a hotel at the apex. Near the green is usually a severe single bunker and road-hugging one side. CB Macdonald used a bunker on the rear of his Road template to simulate the original road.

A Willie Park Jr hole with a slight alteration of the green by Harry Colt. The identifiable characteristic here is an extreme narrowing of the fairway as you approach the hole. The neck can be restricted by a reduction in width, hazard, or some other feature.

Considered to be one of the greatest golf holes in existence, identifiable characteristics include a three-shot hole with multiple routes from tee to green. Alister MacKenzie identified 4 routes available to the player in his book The Spirit of St Andrews. Later, Bobby Jones found another route by playing long thus leaving himself an uphill shot to the pin.

Supposedly the best opening hole in golf, the first at Machrihanish could be called a Cape. There are two identifiable characteristics. Firstly, a bite off as much as you can chew tee shot. (As a well-known example, take Herbert Fowler's 18th at Pebble Beach Golf Links) Secondly, a green precariously situated near the water's edge. The opening hole at Machrihanish isn't a true Cape as per CB Macdonald's iteration and improvement stateside.

Originally, 18 holes were shared between the towns of Leven and Lundin called Innerleven Links. It was the 7th hole on this course that inspired CB Macdonald. After the split, James Braid redesigned the course and the Leven hole became the 16th on Lundin Links known as Trows. Leven (Trows) is an Old Tom Morris original. Identifiable characteristics include a diagonal hazard across the fairway and a green obscured from view from the tee. Visibility is incrementally rewarded for taking on the risk provided by the hazards.

*These classic golf holes were identified in the book Classic Golf Hole Design by Robert Muir Graves and Geoffrey Cornish.

Identifiable characteristics include a depression or "sunken green" as per AW Tillinghast's description. These natural sites are quite common on links land and the free-draining soil allows for their use as green sites. Some are below ground level on all four sides!

An Old Tom Morris original, this short par 3 features an elevated green susceptible to the wind. The identifiable characteristics include severe bunkers fronting the green and hazards behind replicating the original Hill and Strath bunkers and shoreline of the Eden estuary. Any shot that carry the green are caught by the shoreline or backing hazard.

Identifiable characteristics include a blind tee short to a completely hidden green site. Popular in the UK and Ireland, most Dell templates have been watered down due to the potential for litigation or a growing aversion to blind shots. 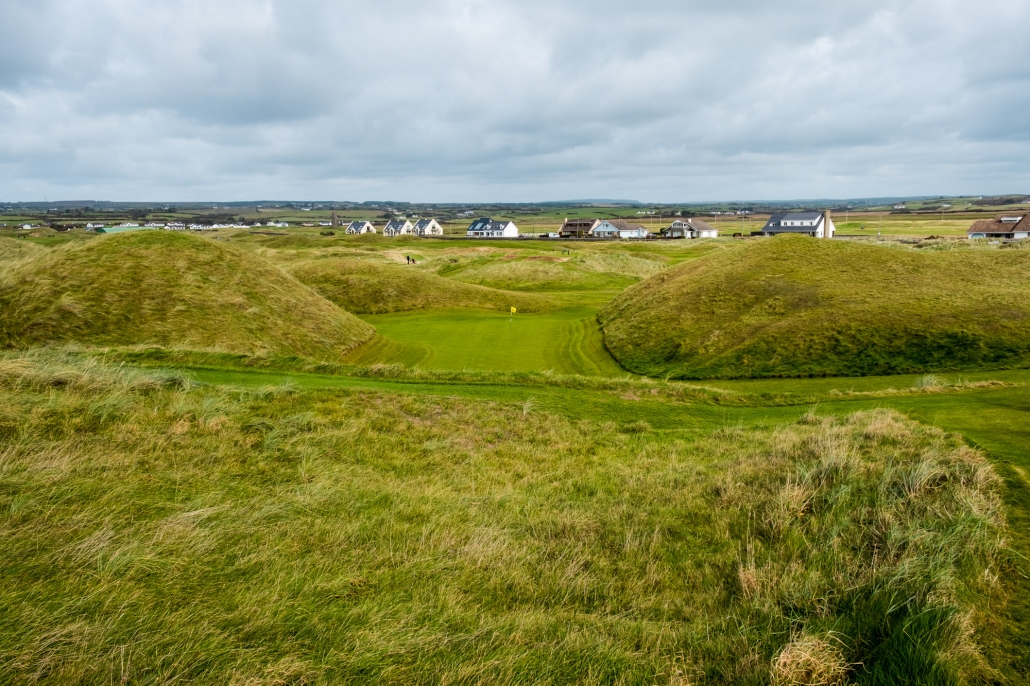 The hole itself, probably an Old Tom creation, is dubbed Cardinal. (Possible alterations by James Braid in 1918 and 1930) However, the bunker of the same name is what has gained notoriety. Identifiable characteristics include a double dogleg and severe hazards. The original has out of bounds down the right side and severe bunkers midway through the hole.

Similar to a Dell. The original from 1887 was completely blind over the largest dune in Championship golf. The original tee was located on the left side of the current 5th fairway. By 1910, the tee placement was moved so the shot needed to carry a smaller dune. In the 1930s the tee was again moved, removing all blindness, to its current position. Take a couple of minutes to read Jason Livy's excellent article along with superb photography of The Maiden.

Known by its relation in size to its namesake. The identifiable characteristic is a very small green... no larger than a postage stamp! While the green size is easily replicated, what makes the original so unique is the constant shifting of the wind which seems to exist around the hole. Its

The identifiable characteristic for CB Macdonald was a dogleg left. Playing along the dogleg it would be a three-shot hole. Played directly to an alternate fairway would allow a player to cut the corner and get home in two shots.

A heightened awareness of template holes and their characteristics can only be a good thing for golf and golf course architecture. Perhaps as the rising tide of awareness swells, the originals will again become as revered as the holes they inspired.