Considered to be Harry Colt's crowning achievement, this is heathland golf at its very best. 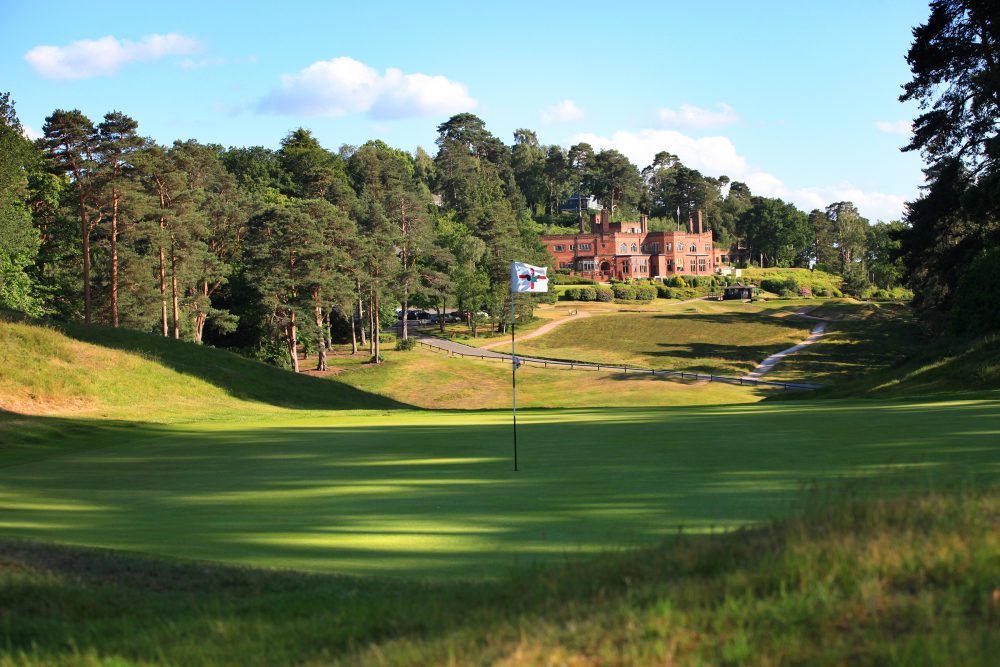 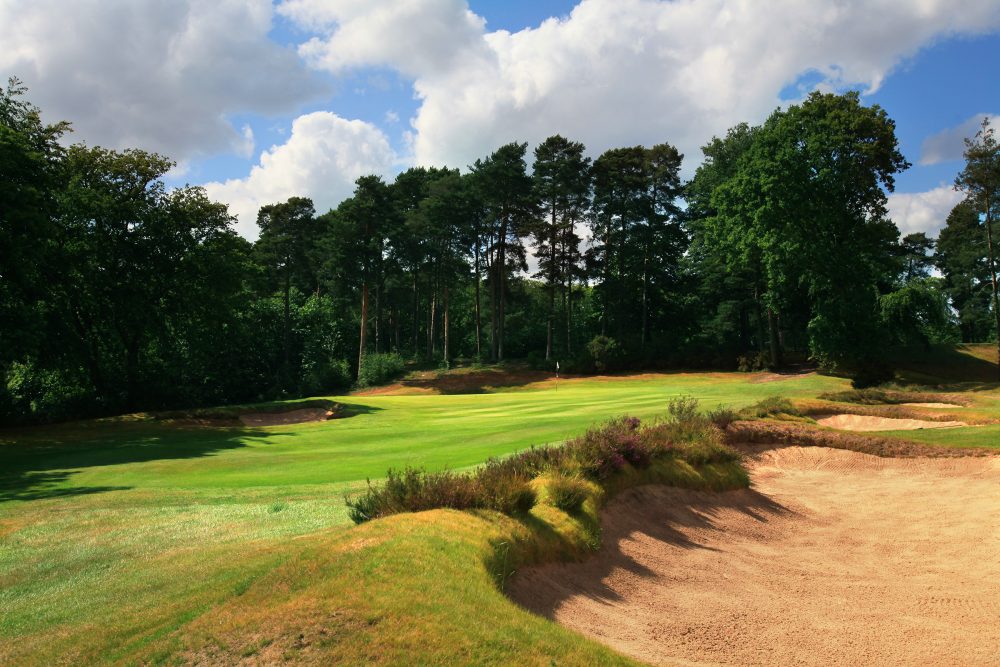 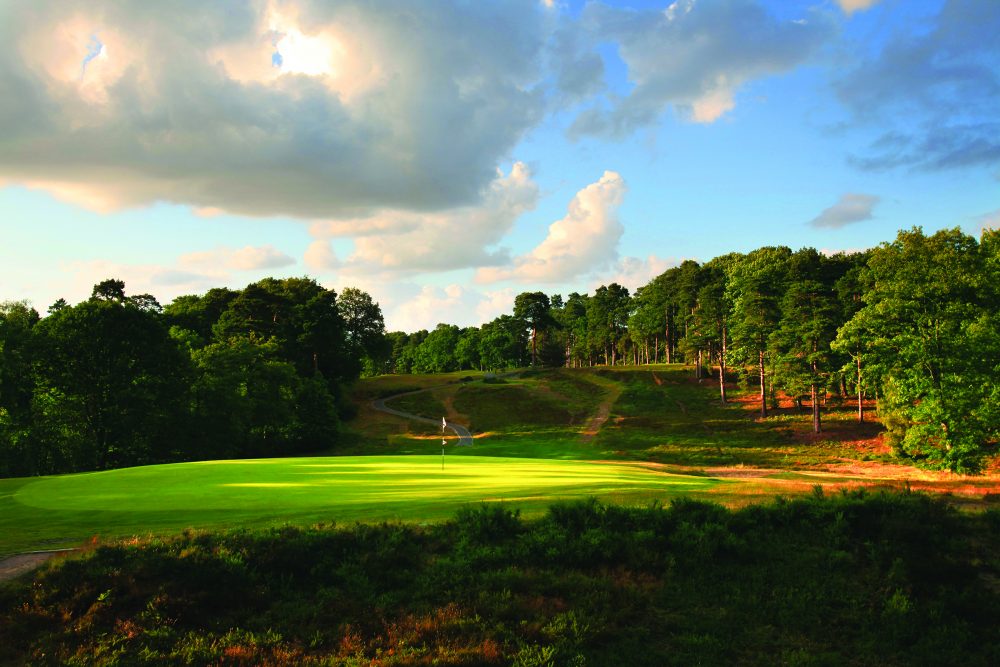 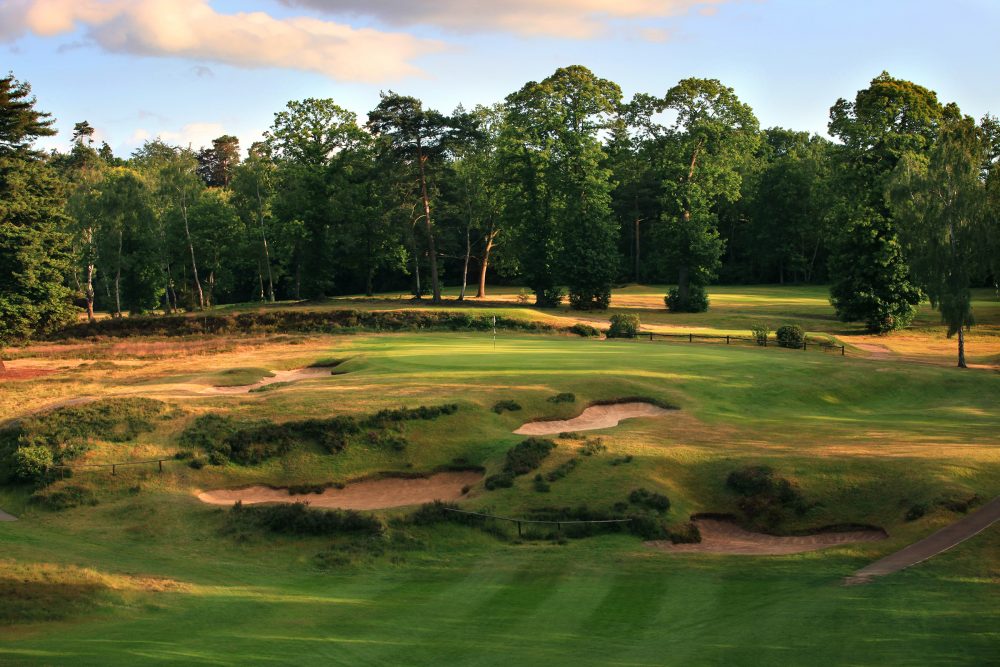 The red-brick clubhouse is perhaps one of the most iconic in Britain if not the world. During WW1, the clubhouse was converted into a military hospital caring for over 3000 wounded. In 1920, the clubhouse was destroyed by fire which began in the thatch roof.

The 8th hole is the cover photo on Robert Hunter's The Links.

The 1st green is not original. It was moved in the mid-1930s from atop the hill to the right to its present location. James Braid advised and Hawtree & Taylor carried out the work.

The remainder of the course is more or less as it was designed. Some bunkers and tees have been moved but the bones are fantastic.

Harry Colt also provided an updated plan to protect the course against the advent of steel shafts in the 1930s. Evalu18 has been able to locate these.

St George's Hill Golf Club is a private member's club quietly tucked away in Weybridge, Surrey, England where visitors are made to feel welcome. Less than an hour from London, it is one of the premier heathland golf courses in England and the world. The rich heathland is laden with heather, scotch pines, and silver birch.

The idea for the estate was to create a golf course with luxury residences lining the fairways. 964 acres of land became available in 1911 and was purchased in 1912 by local developer WG Tarrant. The first development of its kind, the golf course at St George's Hill was ready for play by October 1913, just four years after Harry Colt's work at Swinley Forest. The two nines that make up the original (Old) course are Red and Blue.

Those who built a house on the estate were given membership at the club. Women were allowed access to the course on Sundays if accompanied by a male member. The bondholders were known as "Hillmen" and their company was highly sought after due to the generous offer of the club of a free green fee to a member's guest on Sunday.

A select few were given a sneak peek in 1912. It appears the fortunate individuals were Bernard Darwin & Arthur Croome - both writing a report which appeared in the July 27, 1912, Surrey Advertiser. It was reported that the course would likely cost £35,000 and Mr. Harry Colt was given a free hand. Covered in trees, trees were removed to 'open up the view' & 'let the wind blow freely across the course'.

The course formally opened for play on October 2, 1913. JH Taylor, James Braid, George Duncan, Alec Herd, Tom Ball, Abe Mitchell & Horace Hutchinson were all on hand to open the course. Of note, it was Abe Mitchell's professional debut. CH Alison played in the amateur event between Oxford and Cambridge. Horace Hutchinson served the club as its' first Captain and Prince Alexander of Teck was the first President.

From a golf course architecture perspective, having Harry Colt, JH Taylor, James Braid, CH Alison, Arthur Croome, and others represented a collection of the world's top golf course designers in a single place on the same day!

Golf on a second course at St George's Hill was played as early as 1925. However, it would take until 1929 for Harry Colt's second 18-hole golf course to open for play. Harry Colt was adamant that this was not a relief course or that it be any less great that the Old. Known as the New Course making the original 1913 design the Old. The New Course lasted until 1946 when 9 holes were abandoned due to lack of funds and a reduced membership.

Following WW2, a 9-hole course was opened over the ground of Harry Colt's routing. The Green Nine was upgraded in 1987 following a plan from a member, Peter Preston. Donald Steel was called upon to oversee and implement the upgrade.

There isn't currently much Harry Colt left on the Green Nine. The current 3rd, 5th, 6th, and 8th have elements of Harry Colt's original work. The missing holes making up the balance of the original 18 are now found in the trees between holes 12 to 16 on the Blue Nine.

There are three sets of nine or 27 holes on the private estate at St Georges Hill Golf Club. The Red Nine (1-9), Blue Nine (10-18), and Green Nine (19-27). It is the combination of Red & Blue that you will want to experience. This combination is one of the perennial Harry Colt courses in the world's Top 100 lists.

His work here would also coincide with his work on The Eden at St Andrews. Indeed, his work at Rye, Swinley Forest, Sunningdale New, and St George's Hill puts Harry Colt in the discussion for one of golf's greatest golf course architects. Many would consider his work at St George's Hill to be his crowning achievement.