Routing is confounding with no two holes playing in the same direction.

The parcel of land could easily fit another 18 holes and not feel cramped. Feelings of solitude prevail.

Home to the world-famous Sahara, Maiden, Himalayas and Suez Canal.

Forced carries and target golf fairways. It is a drivers golf course and championship test.

Hallmark red artillery boxes on the teeing grounds & Bogey Score on the scorecard!

William Laidlaw Purves, the founder and creator of Royal St George's Golf Club, is a name that doesn't resonate with golf course architecture aficionados. Born in Edinburgh, he was a member at Bruntsfield Links, Muirfield and the Royal & Ancient of St Andrews. After moving to London, he became a member at London Scottish GC and what would then become the Royal Wimbledon Golf Club. Craving links golf, Purves set off to the Kentish coast in search of dunes land which would provide a blank canvas for a course to rival the best in Scotland. The land chosen to become Royal St George's Golf Club was spied out from atop the St Clements Church in Sandwich.

The dunes are wild and untamed unlike anything found at Muirfield or St Andrews. The course has become not a rival but rather a contemporary amongst the leading golf courses in the world. Only 7 years after the course had been built, in 1894, it hosted the first Open Championship outside of Scotland. It will have hosted 15 Opens by 2021, becoming the Open's home away from home.

Some changes have been made to the course over time. Blind tee shots have been tamed or removed. Routing in and around the famous 6th hole - a blind par 3 called Maiden, has made up the lion's share of the work since its inception.

The most recent major change to Royal St George's Golf Club was made by Mr Donald Steel who moved the 14th green closer to the burn and O.B. whilst simultaneously adding two bunkers on the centreline of the fairway.

On the front nine, perhaps the most demonstrable change is the removal of the sleepers on the Himalayas on 4. Subtle tweaks have also been made for The 149th Open by MacKenzie and Ebert. The 5th, 6th, 7th, 17th and 18th have all been subtly tweaked. The bailout area left of the five-pot bunkers on the inside of the dogleg on 5 has been replaced by a waste area that has the potential to derail your round early and wreck a card. 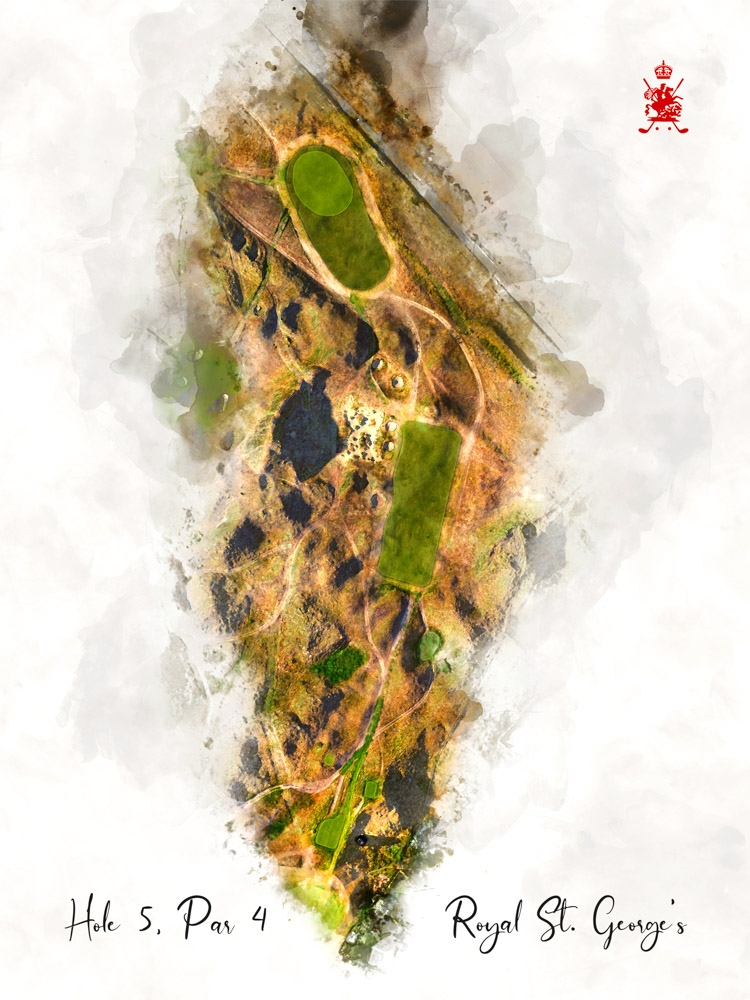 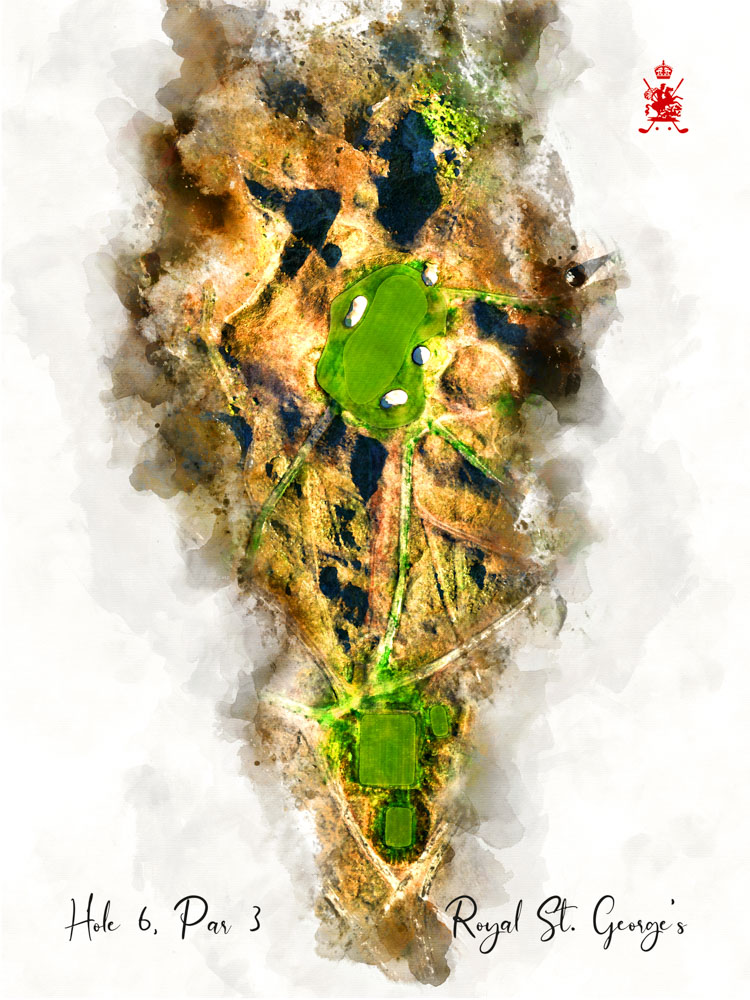 The tee shot on 7 originally had three bunkers which needed to be carried off the tee. By 2008, all three had become grassed hollows. Two of the three have been reinstated which now provide a chute to aim through.

On the back nine, the rear bunker guarding the left side of 17 was a single bunker at the last Open in 2011. In the interim, it became two. Now, for the 149th Open, it has been removed completely. A grass collection area cut short has taken its place instead. 18 was known for three large bunkers bisecting the fairway. These existed until 2007 when the left bunker was removed completely leaving the middle and right. By 2018, the middle bunker was filled and the left reappeared. There are considerably smaller than originally and are now staggered, creating a needle's eye which needs to be threaded from the tee. 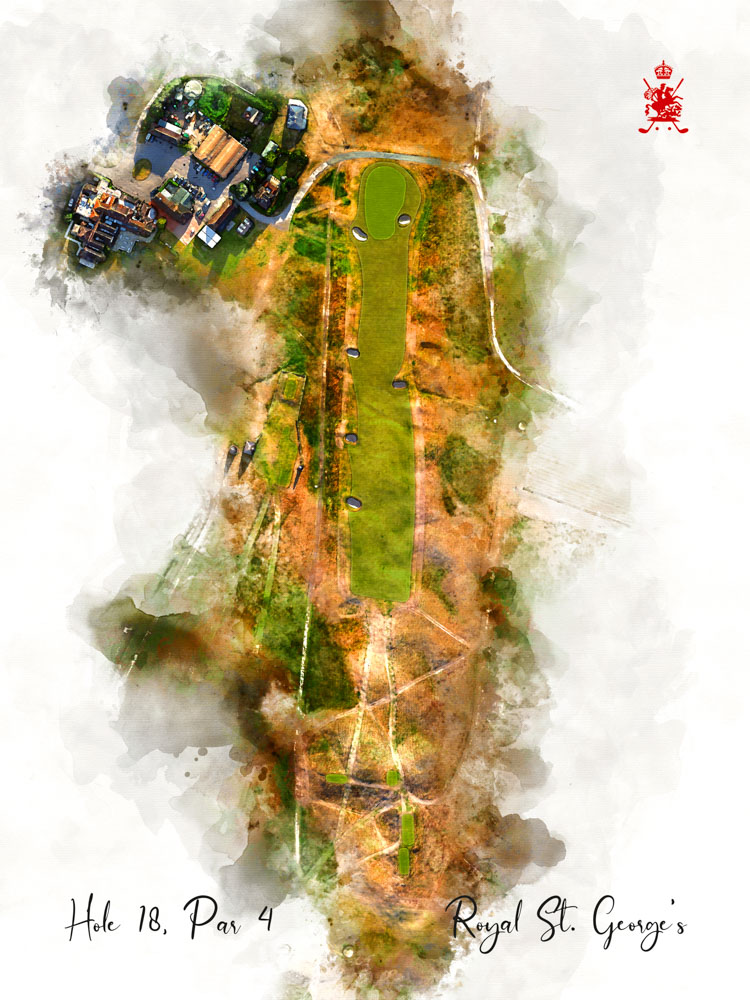 The Royal St George's Experience vs The Championship Test

Royal St George's Golf Club needs to be experienced to be enjoyed. Predominantly a two-ball club, foursomes is the preferred game of choice. Four golfers, playing two balls in alternating sequence plot their way around the course in well under 3 hours in a morning match. Returning to the clubhouse for a legendary carvery and generous libations in jacket and tie is one of golf's most time-honoured traditions. An afternoon match of foursomes is then swiftly enjoyed. Returning to the clubhouse, one makes use of the changing rooms and one of golf's best showers before post-round drinks and departing for home. The course itself is designed for match play. Foursomes paths crisscross the property allowing the matches to expedite play across the 300 acres with which Royal St Georges is routed. The enjoyment of the game itself is the lofty standard and ultimate goal of the Royal St George's experience.*

Card and pencil golf is not the aspiration here... outside of the Open. This is probably why so many have been so vocal about its merits as an Open venue. Nicklaus, Player and Watson all are less than positive about it even questioning its place in the rota. Whilst some of the world's best may doubt its place in the Open rota, the Opens held at Royal St Georges are crowd-pleasers which rarely disappoint. Watching the world’s best battle each other, the elements, themselves and the course create theatre which is rarely rivalled. Polarising for players, it is virtually universally applauded by spectators. Recent winners include Darren Clarke, Greg Norman, Ben Curtis and Sandy Lyle. Prior to WW2, Henry Cotton, Walter Hagen, Harry Vardon, Jack White, and J.H. Taylor were all crowned as the champion golfer of the year.

*For the full experience, spend the extra for a caddy. With a caddy, you will be able to try some of the Championship Tee's (for example, 4 and 5) and alternative tee's reserved for the Open (for example, 13). The first time around it can also be confusing. An experienced guide will lighten the load, lead the way, highlight course changes and show you were some of the most iconic moments of the Open took place. (Tom Watson's hole in one on 6 & The Thomas Bjorn Affair on 16)

Arguably every tee shot is a forced carry over dunes or whins. Whilst most handy golfers playing from appropriate tees won't be overwhelmed, even the best players in the world will need to be on their game when playing from the back tees. Weighing in at just over 7,200 yards, some of the carries will test even the longest hitters especially if the wind begins to howl.

5, 8 and 14 have island fairways. Characteristic of Pine Valley and a hallmark of George C Thomas, target golf from the tee adds another layer of difficulty. 18 originally had 3 bunkers which created a break and line of defence between two island fairways on the final hole.

Due to the exuberant nature of the fairways, there are landing zones that need to be sought after even at the expense of distance. For example, a shorter club will be taken off the first tee to find 'The Kitchen' and in particular 'The Sink' - a somewhat level area on the left-hand side of the fairway from where the attack of the green is easier despite a longer club in hand. Another example is 'The Tennis Court' on 9 which provides a similar advantage.

There are also Turbo Boosts which can be found. A drive which finds the downslope on 7 can add significant yardage to the shot.

Some courses are blessed with impressive dunes. Take Trump Scotland as a fine example. Hitting off elevated teeing grounds into stadium-like valleys, the experience is exhilarating and used to good effect. It can, however, become familiar especially with a prevailing wind in an out and back routing. Sandwich though is different. The first 2 holes wind their way into the dunes. The 3rd, a bunker-less par 3, plays in the valley and in the shadows of some of the largest dunes in all of golf. The 4th plays over or around a dune and halfway up the back of another at the green. The 5th begins atop a dune into a valley and through the sliver of space where the dunes intersect. The 6th plays back in and the 7th up and out. The routing runs up, over, through, parallel with and perpendicular to the ranges of dunes in a thrill ride that would never get old.

The movement in the fairway’s ebbs and flows. There are portions of fairways which offer respite especially on the back nine. However, the rambunctious nature of the fairways creates bounces and caroms which add a layer of uncertainty, unfairness and providence which usually will even out. For those who make a living playing the game, it can and does drive them mad. For those who are here for the experience, forget the score and focus on the match. Embrace it and grab hold of the challenge it presents.

You can purchase the prints for yourself by clicking here