Two ball play only and an access road affected by the tide make this a unique, English golf experience. 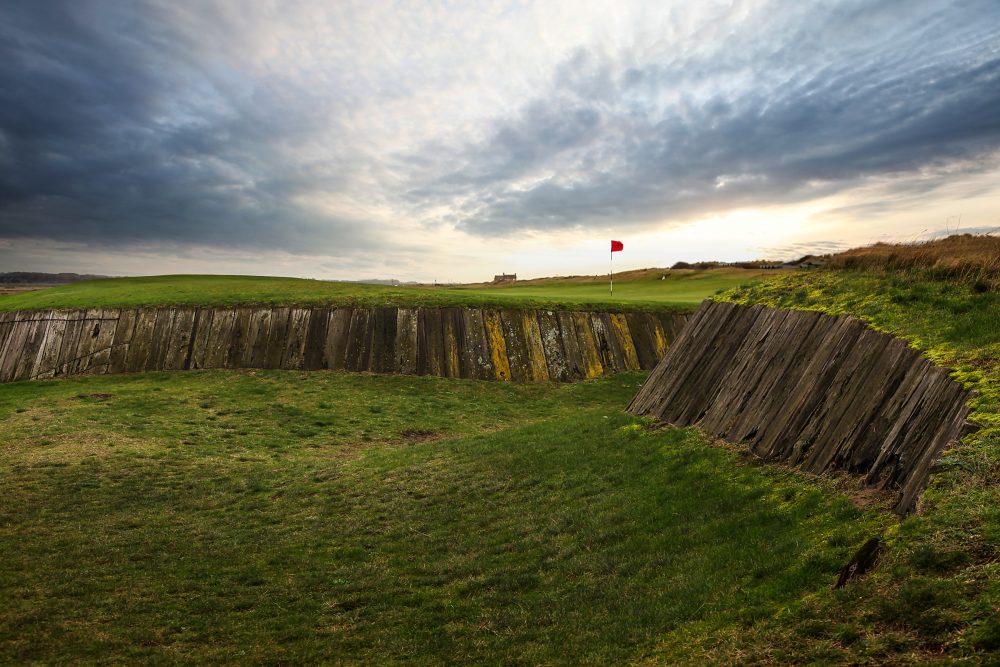 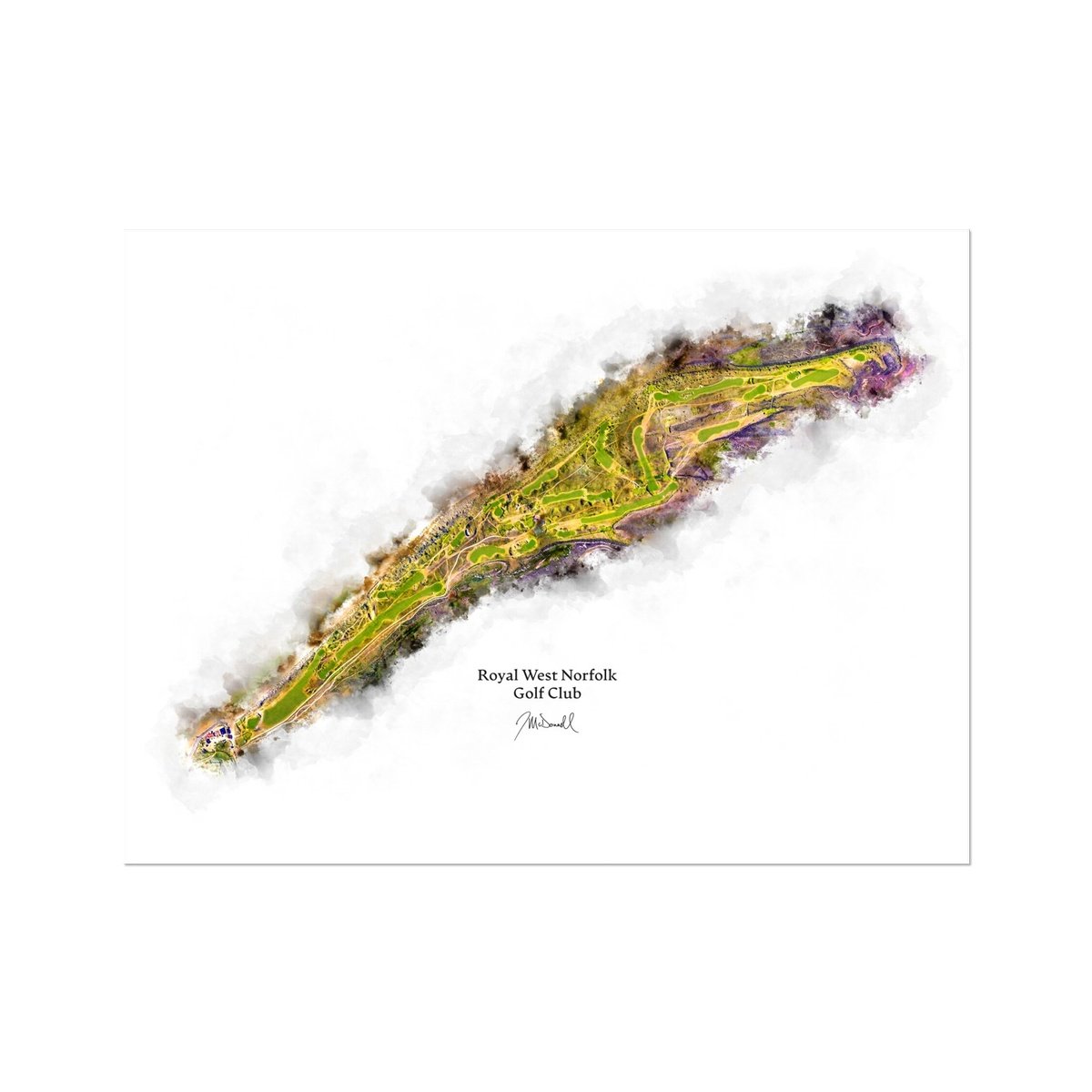 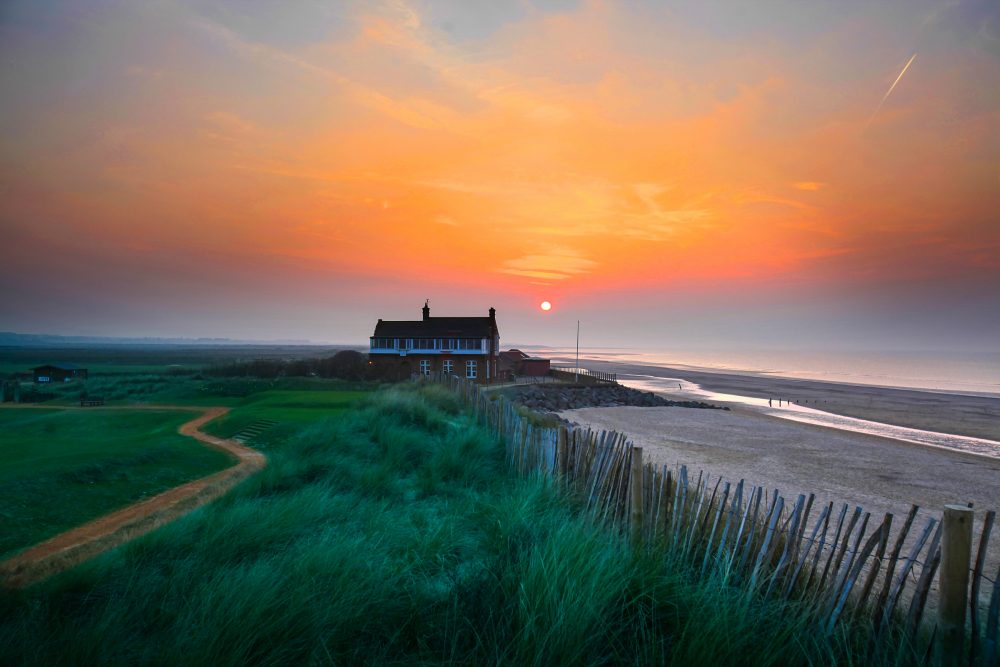 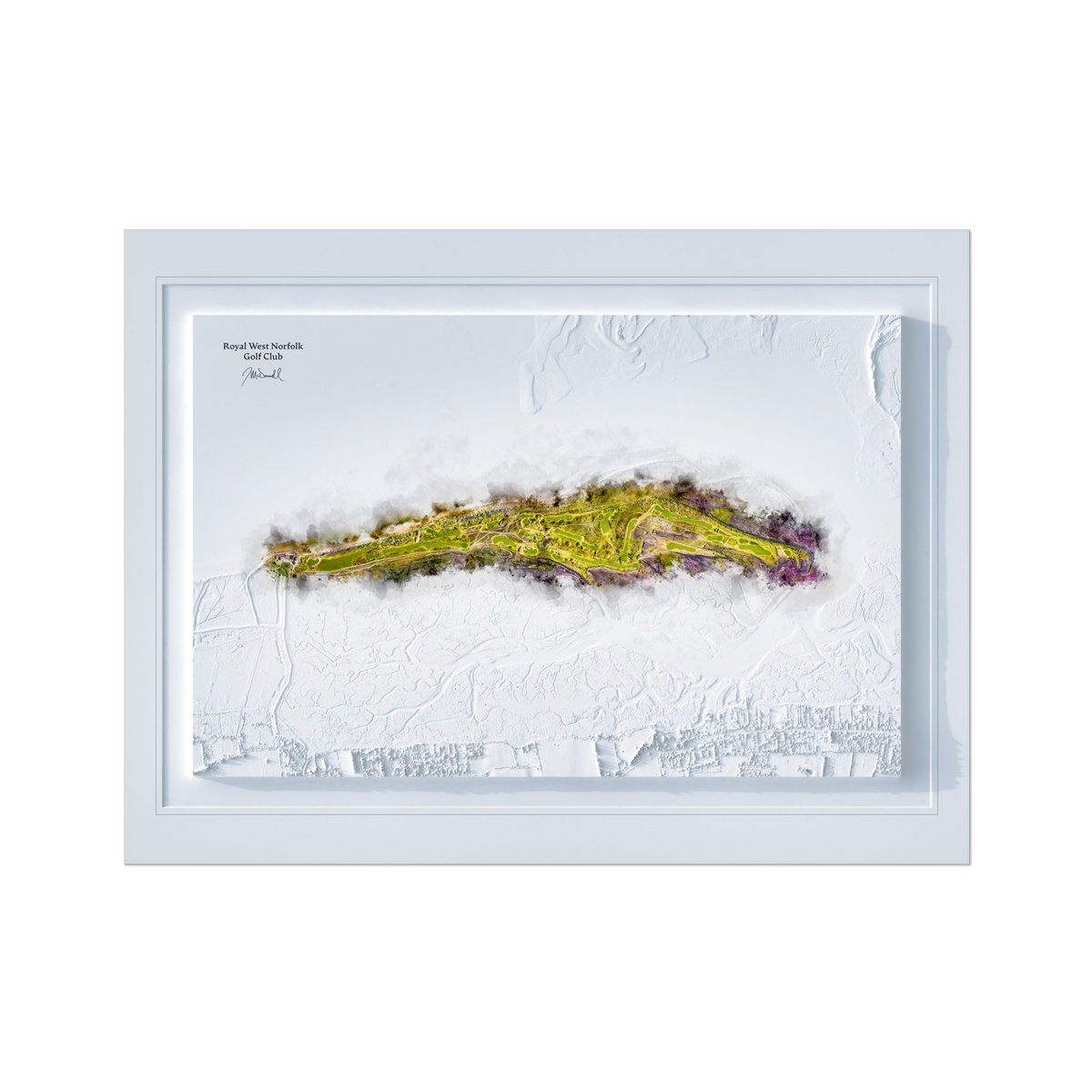 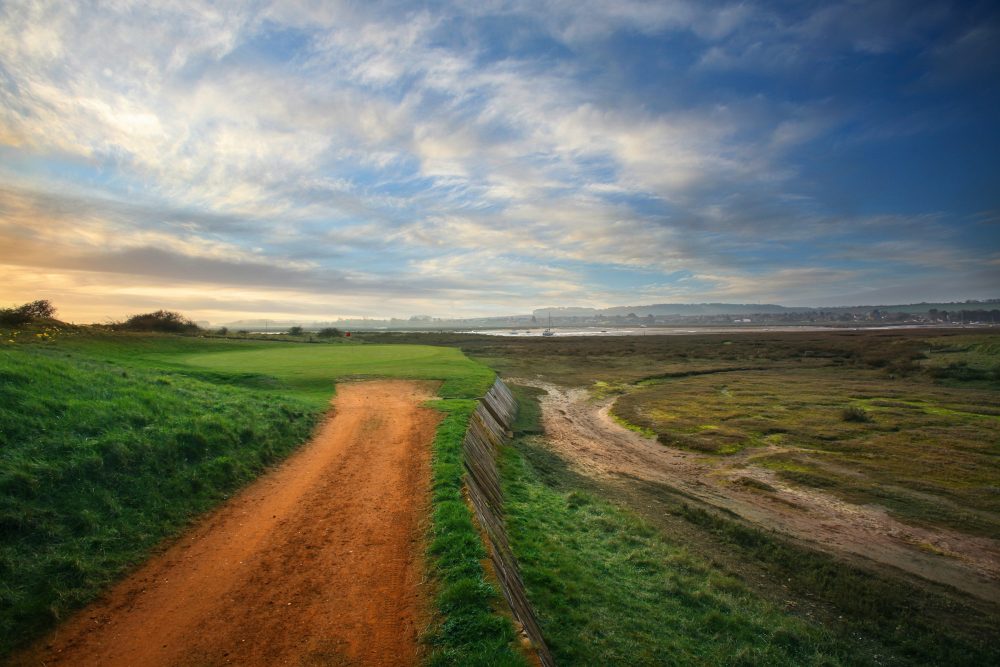 Royal West Norfolk Golf Club or Brancaster Golf Club is unique in many respects. The tidal flooding of the salt marshes not only affects play on eight and nine, but it also affects access to the clubhouse. If flooding leaves you stranded, you have no other choice but to spend a little longer in the benevolently neglected Smoke Room or perhaps even another match. No trip to North Norfolk is complete without a visit to the North Sea and Brancaster Bay. If you visit this links course at high tide, bring a good supply of golf balls.

Situated on a narrow strip of dune land between marshland, it is also common land. The land may be common; Royal West Norfolk Golf Club is anything but. Nowadays, it is not often used for grazing cattle, but if it were, it would not seem out of place. However, dogs are a frequent sight and often outnumber golfers on the links. It is a two-ball club with foursomes and three-hour rounds expected.

The routing of Royal West Norfolk Golf Club is also unique. It runs almost precisely East and West. Modern-day architecture students may well conclude that this would be a fatal flaw. Beyond that, Brancaster seems to break every rule in a relentless quest for quirk. To punctuate it all, a proliferation of sleepers seems to grace every bunker. To what does it all point? A first-class course!

Before you even arrive at the opening teeing ground at Royal West Norfolk Golf Club, you will have enjoyed perhaps the most exceptional walk from the clubhouse to the opening hole in golf. Through one gate and across a sandy thoroughfare a slight turn to your left brings you down a path clad with sleepers at the end of which is the mystical Memorial Gate which stands between you and pure golf Nirvana. It is the perfect introduction to perhaps one of the most fun three hours you’ll ever have on a golf course.

The Royal West Norfolk Golf Club opens with an opening drive over the eighteenth green. The fairway is wide before narrowing about 275-yards off the green. The green is perched on the back edge of the dunes. Any weak shot right or short will be expelled to the bottom of the ledge or swallowed up in one of two bunkers. Long and you find yourself in OB. The tame opening drive feels a little like the first at The Old Course. The approach is reminiscent of the first at Lahinch.

After the first two holes, things seem to proceed as you would expect to see on any other world-class links. The 3rd is a real gem and the first glimpse of what you’ve come to see. The tee shot is a bite as much as you can handle type affair. Play it safe by avoiding the marshland right, and you could find yourself in one of three pot bunkers on the left which will demand a stroke in return for your brief visit. However, it’s the approach shot where things get interesting. Three bunkers front a large wall made of sleepers. The optical illusion created looks as though the green is directly behind the wall. However, it is 55 more yards to the front of the green which is another 33 yards in length! The green also runs away from you, tilting from front to rear.

The first one-shot hole presents itself at the 4th. It is a punchy, uphill hole where the shot can be anything but short. A wall of sleepers creates a visually stunning hole that will intimidate the high handicap and but also captivate the scratch player. This hole was CB McDonald's preferred version of Short and the template used for National Golf Links' Short.

The blind tee shot on 5 is a forced carry of some 200 yards. A large pot bunker is topped with two poles that give you your line. Like rugby or American football, all you need to do is split the uprights.

The second one-shot hole in three, the 6th is impressive. The false front severely punishes anything short and the back to front, right to left-falling green accepts a left to right shot shape. If you do find the bunker right, a bogey would be a fine result.

Eight and Nine are the two show stoppers. Built on flat land, 8 is unimpressive visually, but the strategy more than makes up for it. There are three strips of land running parallel to each other but running away from you with marshland in between. If played aggressively, it can yield an eagle, and a birdie is a good possibility. To achieve the feat, you need to place a long drive on a narrow piece of land. The further you put your shot on the narrowing strip of the fairway, the greater the advantage for your second. If played as a genuine three-shot hole for the high handicap player, the first shot would carry about 150 yards. The second shot of 150 yards along the middle sliver of land leaves you a perfect angle to the green and no more than 140 yards. Played well, a high handicapper can gain a par. He may even win the hole if the gamble of the more accomplished player is not successful. Add the intrigue of foursomes, and you have a strategic masterpiece.

9 has some similarities to the eighth. The green is relatively flat but is laid out in the same orientation as the fairway. Hole placement will dictate the tee shot. The further you hit your tee shot the shallower the green becomes. The degree to which you go left is the degree to which you can use the length of the green. It becomes all the more interesting when you add the hundred or so yard second shot over marshland to a green garrisoned by a wall built from the familiar sleepers.

The Inward Nine at Brancaster

After the world-class eight and ninth, the turn provides a moment of calm. Turning inward, 10 is a one-shot hole straddling a ridge with severe bunkers on the right. 11 is a relatively benign par five, but into the wind it has teeth. The three centreline bunkers come into play on the layup especially if one wishes to access a rear right pin on the right to left sloping green. The highlight of 12 is the elevated, plateau, punch-bowl green.

14 requires a solid drive off the tee to reach the green in regulation. Before the green is a 109 yard carry over two pot bunkers and a sleeper wall set to a sunken green set in amongst a wasteland of sandy scrubland. A superb drive into the prevailing wind will still leave you 150 yards with a short iron to a blind green.

15 is a long par 3, especially if the wind is blowing. The green is in the dunes with a bunker above the green on the right and the left side slopes away leaving a difficult recovery. The real treasure here is the massive soup bowl bunker thirty-five yards in front of the green. While it shouldn’t come into play for the better players, it captures the imagination and diverts the attention from the task at hand.

16 is attacked from an elevated tee in the dunes. The hole dives down then doglegs back up into the dunes. The green tilts in favour of an approach from the bunkers on the fairway’s left-hand side. Any shot left short as a result of being mis-hit or from under clubbing can be caught in an inauspicious pot bunker 25 yards shy of the green.

17 begins again from the dunes. The temptation to the player is to attempt to carry four pot bunkers that will cost you a shot for your excessive greed.

While 18 appears mundane from the tee with a generous fairway, the approach to the green is best made from the left side, closest to the road. This location allows you to take a better angle into the right to left sloping green and reduces the massive serpentine bunker directly in front of the green to a trivial carry. If you take the generous side of the fairway, you open up the entire length of the sleeper-lined bunker in addition to a test of distance control.

Royal West Norfolk Golf Club is an unassuming club that evades the spotlight. Found on the remote North Norfolk coast, some convince themselves it is too much fuss to make the trek. It is perhaps one of the purest golf experiences one can enjoy. It is quirky and unspoiled. It is a must-see course, worth every effort to see... just check the tide first!