The humble Sunday bag is enjoying a renaissance. Once a bit of kit you evolved from, could it be where more of us need to graduate to? With endless product cycles and the disproportionate amount of time and print golf equipment gets, it is easy to see why we convince ourselves why we need to buy what we're being sold. Golf is difficult and for most, the promise of straighter shots, longer drives, and low scores are worth taking a punt on. What though, is the driver for it all? When it is all boiled down is it not simply more enjoyment of the game? Perhaps the best way to find more is to have less... enter the humble Sunday Bag.

I played ice hockey left-handed and played golf that way until my father bought me a set of clubs at a department store in a rural farming town in Saskatchewan, Canada. Purchased on sale and with no returns, I can still remember the first and only set my father bought me - a set of right-handed Northwestern's. The set consisted of odd-numbered irons starting with 3 and ending with 9. A driver and three wood were bookended with a knock-off bullseye putter. A blue, single strap Jones Sunday Bag was bought at a garage sale and I saved my allowance until I could afford a set of FootJoy GreenJoys. This caused fractious division as both my father and grandfather wore Etonic. I was happy to have a set of my own clubs and the fact they were right-handed rather than left-handed didn't seem to cause me any real concern.

As some of you know, I eventually walked away from the game. During the interim, things got complicated! Pushcarts had been replaced by electric trolleys & yardage books had been replaced by lasers with slope. 1, 3, and 5 woods accented with 3-PW, SW, LW, and a putter were no longer sufficient. Hyrbids and driving irons had been introduced and lofts were all over the shop. It was time to catch up and buy the lot! I filled the bag with a traditional set of woods and a set of irons. Then I added a driving iron and a couple of hybrid replacements for the long irons. At one point I had 4 wedges. I bought a stand bag and being in London, I needed an umbrella. After walking 18, I realised I needed a cart. My wife was bemused... she couldn't figure out why I needed so much stuff to hit a ball into a hole.

Every time I wanted to play I had to charge multiple apparatus' and fill the boot with staggering amounts of kit for every conceivable eventuality. It felt as though I was preparing for an expedition rather than a gentlemanly game of golf.

The process started slowly. I realised I rarely hit my 3 or 4 iron. Like someone who tries to quit smoking but still carries a couple of cigarettes and lighter, I kept them in the boot of the car until I realised I was better off without them anyway. I hit my hybrids as far as my fairway woods so they were the next out.

A 52* gap wedge and 60* lob wedge were replaced by bending the other two wedges to a traditional 50* pitching wedge and 55* sand wedge. It was enthralling - how many more could I drop? I eventually gave up the even-numbered irons. I was playing 5, 7, and 9 irons, two wedges alongside a driver, hybrid, and putter.

There is a range of options when choosing the vessel that holds the implements of golf. From cart bags to carry bags of all descriptions, the most obtuse is the tour bag which also doubles as a billboard. Perhaps the most symbolic change was when I acquired a Mackenzie Sunday Bag sporting a single strap with one divider of lightweight design. Utterly ridiculous to carry a full set in it, the Sunday Bag has prevented me from stumbling backwards toward my old ways. I was back to where I began as a youth and golf felt simple, pure, and authentic again.

While the rules of golf allow you to carry 14 clubs, I now proudly carry a short set in a Sunday Bag. None of my irons have numbers... actually, they don't have any markings at all. Not done intentionally, I simply cannot decide what I want. The lofts are approx. 28*, 36*, 44*, 52*, and 58* (updated). They are hand-ground blanks from a Japanese forge called Kyoei and have black onyx ProjectX 6.0 shafts. It's not so difficult to choose the correct one. With the bag off my shoulder and on the ground, the longest iron is the 5 equivalent and the shortest is the 9 equivalent. Even I can figure out the middle one. 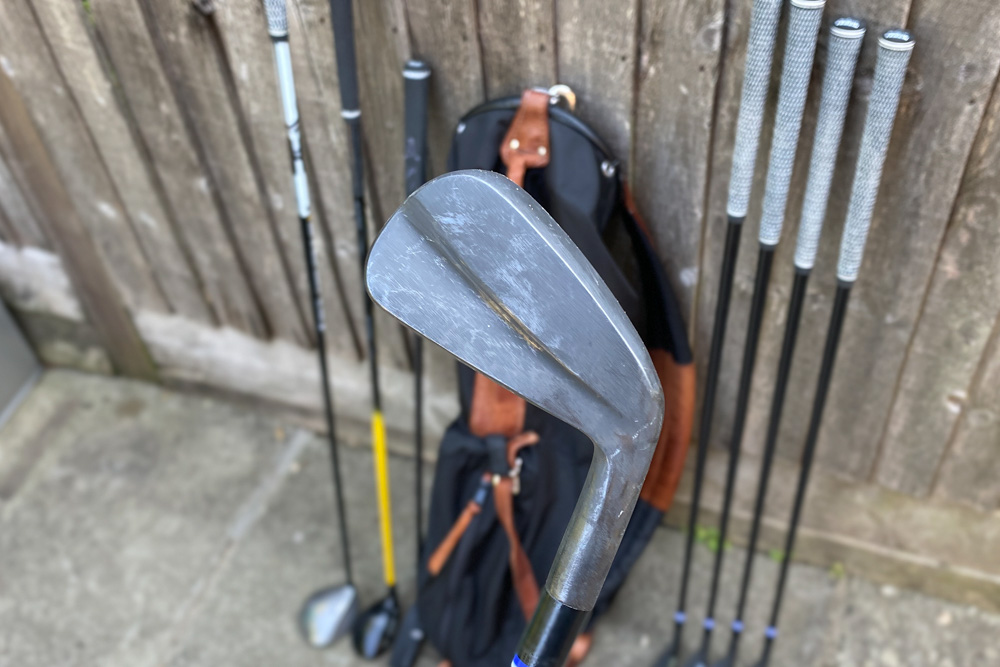 I game an Edel E2 putter that has been custom fit. For most rounds, I carry a Cobra Baffler 3 hybrid and an old Callaway Big Bertha Deuce. If I am playing a 'proper' course that demands length, I'll drop the Deuce and add the Titleist 917 D3. A Cobra Baffler 16* hybrid can be used for the gap left between the 3 hybrid and my driver. My hybrids and driver sport Accra graphite shafts. Whatever the course, I carry 8 or 9 clubs. What motivated me to make the change? I felt as though I was losing the spirit of the game and in danger of almost knowing too much. 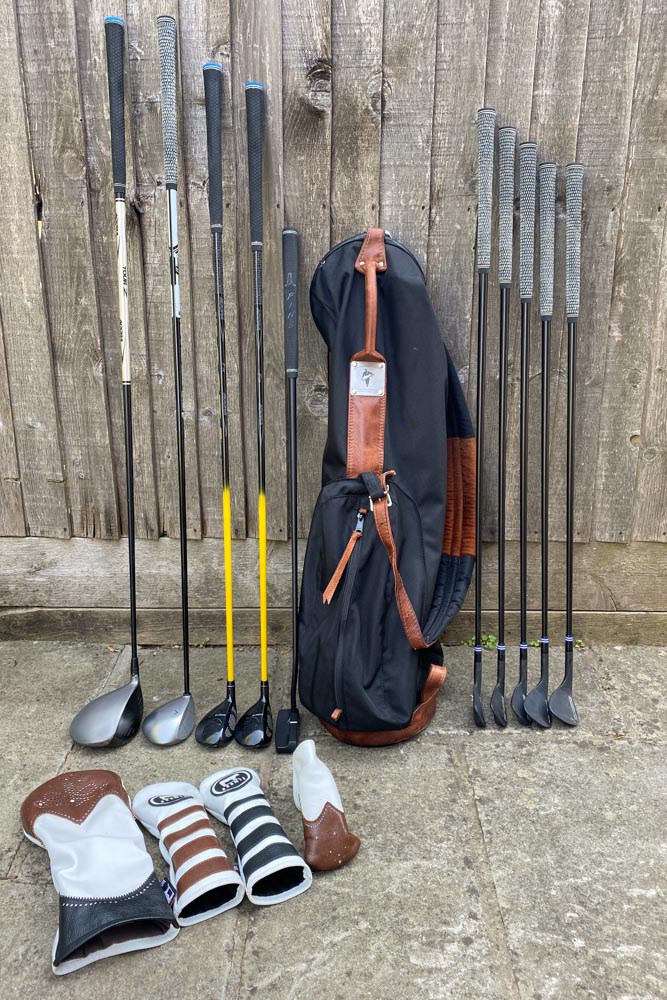 Gaming a half set in a Sunday Bag when you could have 14 clubs in your bag initially fees like your giving up shots. When you adjust to playing with the minimum number of clubs, you realise having an extra club or two is superfluous. Ditching the excess and carrying a pencil bag, Sunday bag, or double strap carry bag, reestablishes you with the roots of the game.

The Spirit of the Game

Some people have called me a 'purest'. I don't think I've ever intentionally taken that tack. It is true that I prefer common land golf over rough ground than flattish, resort, cart golf. However, the Trackman Range nearby is pretty great for practice. I'd readily admit I would prefer to have an old Wood Bros. persimmon than the new SIM from Taylormade. I'd rather have a MacGregor M85W than the new Callaway Mavrik. It's not that I have anything against them, it's simply the marginal gains between them and my current gamer aren't worth it. They may give me ballz-ier results but they cannot offer the percussion of persimmon or the intangible reality of catching one on the screws. It's a feeling rather than absolute fact... something a laser range finder with slope definitely cannot provide.

Intangible Gains From a Sunday Bag

Carrying a Sunday Bag comes with an inherent lack of options. That, in turn, makes my decisions both easier and quicker. It demands me to think about plotting a course rather than hitting a number. In some cases, I even need to think about shot-shape and then attempt to pull it off.

It also keeps me honest as I'd far rather enjoy a round from the forward tees than endure the self-flagellation of a game from the tips. I may give up some distance and perhaps even a few shots a round but it's a trade-off made with no regrets.

The swap to a Sunday Bag has also helped me worry less about scoring and focus on simple enjoyment and having fun. If I am playing with others a match is just as intense and competitive, perhaps even more so if you can carry the day with half the kit in a canvas Sunday Bag with a single strap.

It may well be the millennial craft movement that has breathed life into small-batch manufacturers of the Sunday Bag. Whatever the case, it does feel good to reward those who put their heart into their work rather than line the coffers of faceless corporations. Having less has also allowed me to acquire pieces that I really love. Less and better rather than more and average. My wingtip headcovers from Dormie Workshop accent the Sunday Bag perfectly and are a great example of this. 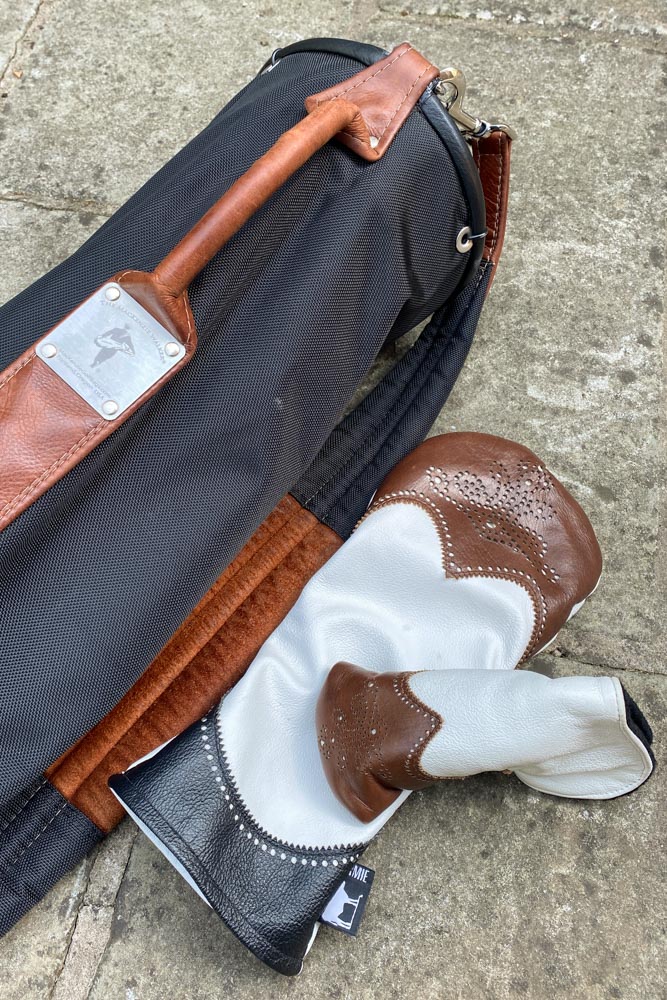 From Sunday Bag - Where To Next?

Stripped back to bare essentials, I have even given up the glove. I still carry a yardage book if it's a course I'm not familiar with or one from which I want a memento. I love persimmons and I am on the lookout constantly. I've also toyed with gaming hickories again and have decided at some point to add some Tad Moore Star OA's or a Louisville Precision Series set. I spend far too much time dreaming about my imaginary set of National Custom Works.

The fact is none of these things is actually needed and you could say the same thing about a Sunday Bag. In fact, it could be as simple as choosing evens or odds. As my wife often reminds me, it is as simple as getting the ball in a hole.