If you’ve ever imagined a mystical piece of paradise where your wildest golf fantasies become realities you’re in good company… we present the Herbert Fowler Ideal Golf Course. Most of us have dreamt of designing our own golf course. For a privileged few that may be a reality, but for most of us, our imagination is the only place our design work will be seen. Perhaps there is a piece of land which captures your attention and stirs your soul or your local is ripe with potential. In any event, likely you begin with something already fixed in place. Now imagine the scenario where you start with a completely blank canvas or no canvas at all! The ability to manufacture the perfect course from this starting point would be the mark of a genius – enter Mr Herbert Fowler.

In the Illustrated London News on 26 July 1913, Herbert Fowler explained which ideals his perfect golf course would have to contain. He lists the following five features:

It should be mentioned that this course would be for the scratch player or professional golfer. Only one set of tees is shown and no explanation offered as to whether they were given consideration.

What conclusions can we reach with regards to these 5 points? Firstly, Herbert Fowler admits his ideal course is at odds with the Old Course at St Andrews on 4 of the 5 points listed. As inspiration, he fails to mention the Old Course at all. He includes holes from Royal North Devon, North Berwick and Walton Heath Old Course. Secondly, he mentions there must be at least four Par 3’s, and he hits this mark with his perfect course. He mentions there should be no crossing nor confusion with regards to routing. On the front nine, an interesting feature hosts the 1st, 4th and 8th green sites in addition to the 2nd, 5th and 9th teeing grounds. Finally, he details that no two holes should play in the same direction. This is accomplished on The Herbert Fowler Ideal Golf Course using triangular routing only once on holes 2, 3 and 4. 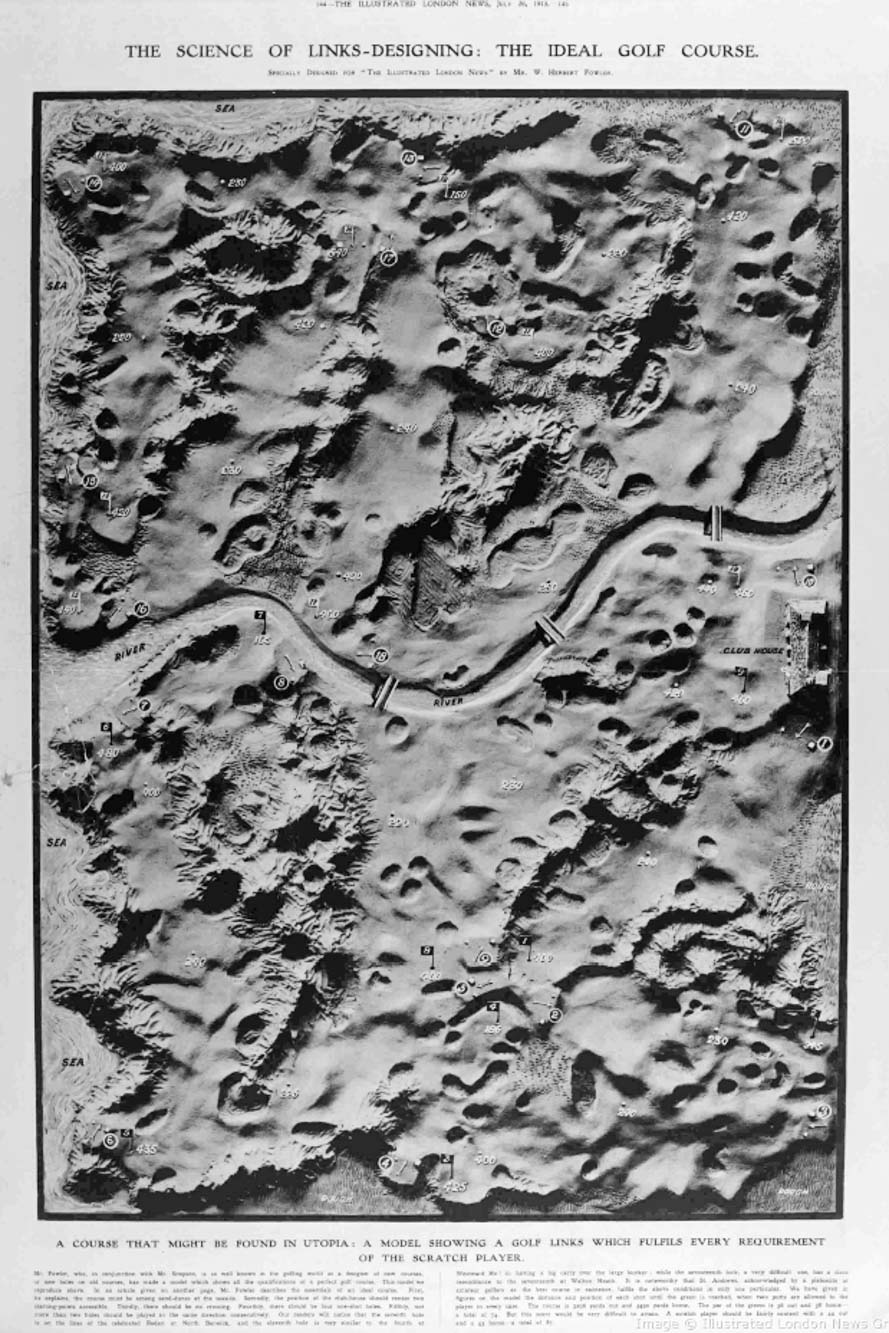 Below is a breakdown of the front nine including Par and Bogey Score. Following the hole descriptions provided by Herbert Fowler himself, there are the yardages of the ideal requisite shots are given.

* A note on Bogey Scores from the British Golf Museum: “Originally, bogey was the score that a player of high amateur standard should reach, while par was the standard for professionals and championship-level amateurs. On some holes, bogey was one higher than par…”

The hole is ideally played with a 240-yard drive over a ridge that has a bunker built into it on the left-hand side of the fairway. This leaves a 160 yard a punchbowl (crater) green that is not heavily guarded. Bunkers adorn the green site leaving a small avenue for the running shot. (Drive: 240 yards/ Approach: 160 yards)

A long straight drive over a gully or ravine of 230 yards to a plateau. This leaves a 95-yard pitch to a small and well-guarded green. Accuracy of both driving and pitching is being tested. (Drive: 230 yards/ Approach: 115 yards)

A difficult par 4, the hole requires two heroic shots. A straight hole which must be played as a dogleg left, one must be on the right of the fairway off the tee. If you are on the left-hand side of the fairway, access to the green is blocked by a bunker. The hole is played as a dogleg left. (Drive: 240 yards/ Second: 160 yards / Approach: 25 yards)

The first one-shot hole features a long and narrow green that is closely guarded. A shot of 130 yards must be made to carry a bunker which protects the front and right of the green.

A large hill is a prominent feature from the tee, which must be carried or run over. The landing zone for the tee shot is blind. A large half-moon or Cottage Bunker will catch any feeble second shots. Wing bunkers guard the front of the green while the crashing waves of the sea crash behind the green. The hole is straight. (Drive: 235 yards/ Approach: 210 yards)

The first three-shot hole plays along the seaside over the crumpled dunes with multiple ridges that need to be carried. The tee shot is at an angle to the direction of the fairway creating a Cape. The second shot is blind. A ridge with a large bunker 80 yards in front of the green. The green itself is 40 yards long and contains a prominent ridge. (Drive: 240 yards/ Second: 160 yards/ Approach: 80 yards)

A Redan after the famous hole at North Berwick. A shot must be played away from the hole to the hill on the right or a high shot with much ‘stop’. At the head of the Redan is a water hazard!

A dogleg right. A large Principal’s Nose hazard guards the landing zone. A 180-yard shot is left to a well-guarded green with a large, deep bunker to the rear. (Drive: 220 yards/ Approach: 180 yards)

A dogleg right. Routed along a ridge to the right a large undulating green is perched on a ledge below the clubhouse. Uphill, the second shot must be to a narrow strip of land guarded left and right by bunkers. (Drive: 230 yards/ Second: 190 yards/ Approach: 40 yards)

Below is a breakdown of the back nine including Par and Bogey Score. Following the hole descriptions provided by Herbert Fowler himself, there are the yardages of the ideal requisite shots are given.

This hole resembles the famous 9th at Royal North Devon Golf Club – Westward Ho! The tee shot is over a river to a fairway laying diagonally from left to right, reverse Cape. The landing zone for the drive is wide and is primarily used to set up the approach shot to a small portion of the fairway that is heavily bunkered on the right. The green is protected by two pot bunkers on the front and left. (Drive: 240 yards/ Second: 180 yards/ Approach: 100 yards)

This hole resembles the 4th at Royal North Devon Golf Club – Westward Ho! A massive bunker needs to be carried from the tee and the green is situated os a ridge or plateau. (Drive: 220 yards/ Approach: 180 yards)

A short hole but its all carry over dunes and sand scrapes to a green which slopes away to the right. Two pot bunkers guard the front and a single bunker the left side of the green.

The seaside runs along the entire right side of the hole. Characterised by a narrow fairway, a bunker squeezes the ideal landing zone. The green is well guard left and right and is on a ridge or plateau. The hole plays straight. (Drive: 230 yards/ Approach: 170 yards)

A dogleg to the right to a green set in a hollow. The seaside lies to the right of the entire length of the hole. One-pot bunker lies to the left of the green and two pot bunkers guard the green short and right. This is a difficult par 4. (Drive: 220 yards/ Approach: 180 yards)

Nothing more than a pitch to an elevated green with 4 bunkers protecting the front and water off the back.

The longest and most difficult hole on the course. A true three-shot hole, the tee shot is limited by a prominent ridge running across the fairway. Uphill from tee to green, the putting surface sits proud and exposed to the wind. (Drive: 230 yards/ Second: 190 yards/ Approach: 120 yards)

From an elevated tee, the hole plays downhill to a green that is unprotected on the front but is entirely bunkered on the left, has a deep pot on the right and water off the back. You can be anything but left, right or long with your approach. This hole resembles the 17th at Walton Heath. (Drive: 240 yards/ Second: 180 yards/ Approach: 40 yards)

Risk and reward, this short par 5 where a perfectly placed tee shot rewards a chance to go for the green in two. A burn bisects the hole and will penalise anything that is less than perfect. (Drive: 250 yards/ Second: 190 yards/ Approach: 20 yards)

The length must be viewed in context. This was well and truly in the hickory era and the Haskell had just been introduced the decade prior. Fowler was known to be an intimidating character, physically and off the tee. Yet, the longest drive is 250 yards and the longest approach is only 190 yards. This would mean the longest one-shot hole is the equivalent of the longest approach. As explained previous, this course was laid out perfectly to test the best.

It is interesting to also think about the contrary views of his business partner, Tom Simpson. Tom held the Old Course in the highest regard. His omission of any holes would have made for an awkward chat in the office around the water cooler after the article had been published. While no mention is made of who was responsible for the model itself, Simpson was known as an artist and craftsman and dabbled with plasticine. I can almost see him putting in the Principle’s Nose on the 8th with a wry smile on his face, righting the wrong of Fowler’s oversight…

In any event, the model provides insight into Fowler’s thoughts on links golf and best practice. While most know MacKenzie’s Ideals, not many know of Fowler’s Five. Perhaps when you play your next Herbert Fowler design, his design ethos and a 110-year-old model will give you some insight into his design ethos. We must admit that his views, as do ours, continued to evolve and mature.

We hope you enjoyed learning a bit more about The Herbert Fowler Ideal Golf Course and about the design ethos of the golf course architect himself.