John Low’s and Stuart Paton’s addition to the centre of a single fairway on 4 Woking Golf Club helped shaped golf into what it is today. The resulting impact on inland golf, strategic golf design and the career of Tom Simpson make them possibly the most significant man-made hazards in golf. Their significance cannot be understated. However, the rest of the hole is also intriguing.

What Has Stayed the Same

What can we say with confidence? Firstly, the railway which runs parallel to the hole hasn’t changed location. Using this a general reference and Simpson’s measurements, we can also conclude the site of the centreline bunker complex hasn’t migrated. As well, the location of the front left green-side bunker is as per Simpson’s sketch. The opening is still roughly 20 yards.

At some point, a further bunker was introduced on the left side of the fairway. The trees on the left were planted or propagated, and an access road for the greenkeepers added. Additional tee’s to lengthen the hole also appeared.

Width and along with it, heather. The left side of the fairway extended at parts beyond even the path that meanders through the trees. Simpson defines 35 yards of fairway left of the hazard before finding the short heather. Additionally, the second bunker on the left-hand side of the green is now gone. The green extended beyond the front bunker and bisected the lost, left-side bunker. The right green-side bunker which ran the length of the green has also been lost. Simpson notes a significant left to right tilt to the green itself as a notable design feature. This tilt appears to be conveyed in Simpsons sketch, especially on the right and to the rear. It also seems to show heather-clad hillocks at the back of the green complex.

Will There Be a Restoration?

Plans are afoot for further restorative work. Only time will tell which features will be restored. It seems inevitable heather and width will see a return. Will the additional left fairway bunker be removed? Could the lost green-side bunkers be reintroduced? Will the green be increased to its original size? Will shaping and heather return behind the green? We wait with baited breath to see what happens on 4 Woking Golf Club.

Woking has a significant history of design works. The fourth as shown has changed despite the reverence it deservedly garners. The eighth and ninth have a turbulent history. A second sixteenth was recently created, and the original made into a turf nursery. Woking has proved itself to be resilient despite change and improves continually. 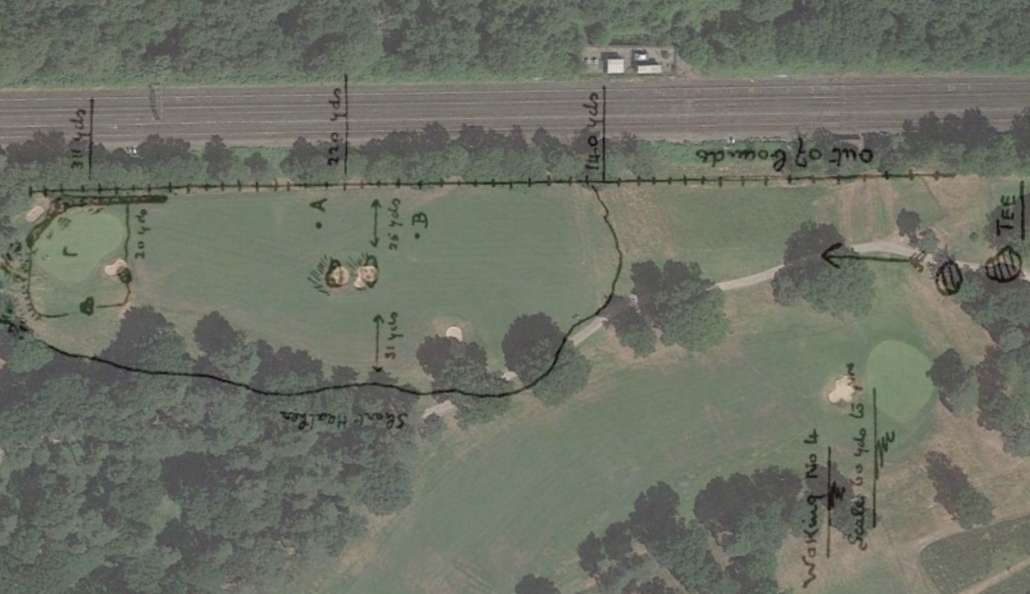